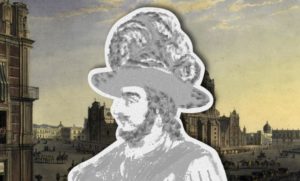 Gil Pérez was a Spanish soldier of the Filipino Guardia Civil who allegedly suddenly appeared in the Plaza Mayor of Mexico City (more than 9,000 nautical miles from Manila, across the Pacific) on October 24, 1593.

He was wearing the uniform of the guards of Palacio Del Gobernador in the Philippines, and claimed he had no idea how he had arrived in Mexico.

Perez claimed that moments before finding himself in Mexico he had been on sentry duty in Manila at the governor’s palace. He admitted that while he was aware that he was no longer in the Philippines, he had no idea where he was or how he had gotten there.

He said that moments before he arrived there, His Excellency the Governor of the Philippines, Gomez Perez Dasmariñas had been killed by Chinese pirates.

He explained that after long hours of duty in Manila, he felt faint, leaned against a wall and closed his eyes; he said he opened her eyes a second later to find himself somewhere different.

When he asked a bystander where he was, he was told that he was in Plaza Mayor (now known as Zocalo) in Mexico City.

When it was explained to him that he was now in Mexico City, Perez refused to believe it saying that he had received his orders on the morning of October 23 in Manila and that it was therefore impossible for him to be in Mexico City on the evening of the 24th.

Soon, guards in New Spain got the information about Pérez thanks to his claims and his strange Manila uniform. He was brought to the authorities, including the Viceroy of New Spain, Luis de Velasco, whose palace was where he was transported to.

The authorities placed Perez in jail as a deserter and for the possibility that he may have been in the service of Satan. The Most Holy Tribunal of the Inquisition questioned the soldier, but all he could say in his defense was that he had travelled from Manila to Mexico “in less time than it takes a cock to crow”.

As a loyal and decorated soldier, Pérez took everything in stride and cooperated with the authorities.

Eventually, he was found to be a devout Christian and, coupled with his good conduct, he wasn’t charged with any crime. But still, the authorities didn’t know what to do with the unique situation and kept him imprisoned until they came to a solid decision.

Two months later, news from the Philippines arrived by Manila Galleon, confirming the fact of the literal axing on October 23 of Dasmariñas in a mutiny of Chinese rowers, as well as other points of the mysterious soldier’s fantastic story.

Witnesses confirmed that Gil Perez had indeed been on duty in Manila just before arriving in Mexico. Furthermore, one of the passengers on the ship recognized Perez and swore that he had seen him in the Philippines on October 23.

Gil Perez eventually returned to the Philippines and took up his former position as a palace guard, living thenceforth an apparently uneventful life.

Regardless of the scientific investigations of teleportation, the story of Gil Perez is a rather scary one – particularly as he had no control over his translation from one place to another. Whether the story is true or not, it is a fascinating tale that has survived for hundreds of years unchanged.