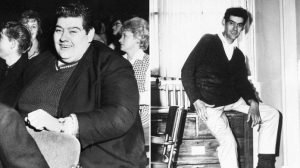 Starting in June 1965, Angus Barbieri fasted for 382 days. He lived on tea, coffee, soda water and vitamins, living at home in Tayport, Scotland, and frequently visiting Maryfield Hospital for medical evaluation. He lost 276 pounds (125 kg) and set a record for the length of a fast.

In 1965, Barbieri, then a 27-year-old from Tayport, Scotland, checked into the Maryfield Hospital in Dundee. Initially only a short fast was planned, due to the doctors believing that short fasts were preferable to longer ones.

Barbieri insisted on continuing because “he adapted so well and was eager to reach his ‘ideal’ weight”.

No breakfast. No lunch. No dinner. No snacks. No calories at all. For 382 days ending on 11 July 1966, he consumed only vitamins, electrolytes, and zero-calorie beverages such as tea, coffee, and sparkling water, although he occasionally consumed small amounts of milk and/or sugar with the beverages, especially during the final weeks of the fast.

Instead of his body burning the calories he ate, it burned up his fat stores. He quit working at his father’s fish and chip shop, which closed down during the fast.

Doctors maintained regular blood-sugar checks on Angus, ensuring his health was not in danger.

Barbieri’s starting weight was recorded at 456 pounds (207 kg) and he stopped fasting when he reached his goal weight of 180 pounds (82 kg). He broke his fast with a boiled egg and a slice of bread, telling reporters afterwards that he “thoroughly enjoyed my egg and I feel very full”.

After his weight loss, he moved to Warwick and had two sons. He put on a few more kilograms in subsequent years, but never became obese again. Barbieri died in September 1990.