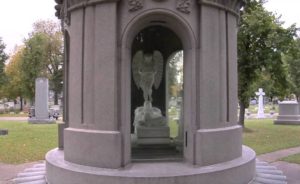 The story surrounding the Blocher monument is an interesting one. Forbidden to marry a servant girl he loved, son Nelson was sent to Europe on business by his parents. He returned to find his love had been deported by his father, and died of a broken heart just over 2 years later at the age of 36. His distraught parents built the monument over his grave, not only out of love for their son but also out of guilt. The father, mother and son are all interred at the monument

Nelson Blocher was a bachelor and still living at home at the age of 34, when the family hired a new maid, 20 year old Katherine in the spring of 1881.

Nelson, who made frequent buying trips to Europe to purchase leather goods for the family business and art and furniture for the family home, was immediately smitten and made no attempt to hide it. During the spring and summer of 1881, he spent as much time as possible with Katherine. Nelson’s parents, however, did not approve of the romance and quickly made plans to put an end to it.

In the Autumn of 1881, Nelson’s father John announced that there was business that needed attending to in Europe and Nelson needed to make plans to leave for an extended trip. Clearly Nelson’s father wanted to separate the couple and put an end to the romance, with the couple barely having time to say goodbye, so quickly was Nelson rushed away on his trip.
As soon as Nelson was safely out the way, Katherine was sacked and told in no uncertain terms not to return to the household and to stay away from their son.

When Nelson returned 6 months later in the spring of 1882, he found that Katherine was gone and no one knew where she was. The heartbroken Nelson was determined to find his sweetheart and persuade her to come back and marry him and spent the remainder of the next 18 months searching for her.

By Autumn of 1883 the heartbroken Nelson was broken in spirit and mind and sick with a fever took to his bed, and soon became bedridden with depression, and passed away at the age of 36 on January 24th 1884. His only comfort during this period was the bible that Katherine had left behind in her sudden departure, and he died with this clutched to his chest. 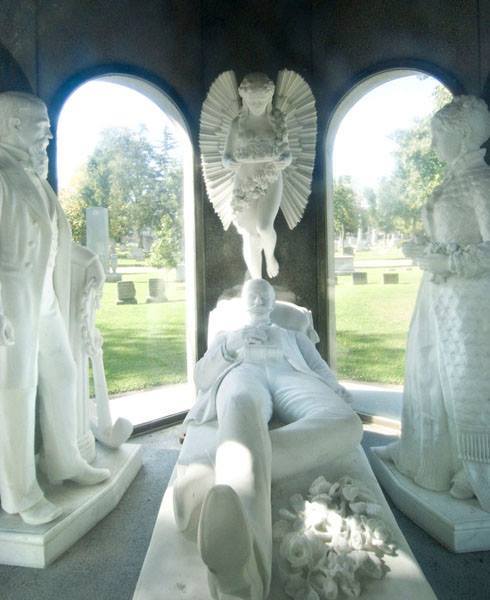 Nelson’s mother, Elizabeth, driven by both of love of her son and guilt, insisted that a suitable memorial be erected to her son.

Husband John Blocher designed and crafted the mausoleum himself, and hired Swiss born, Italian sculptor, Frank Torrey from Carrara, Italy to make the statues. Torrey wasn’t prepared to travel to Buffalo, so Blocher supplied the sculptor with the necessary details and measurements of Nelson, Elizabeth, and himself.

It took Torrey nearly 3 years to complete the statues, and when they were finally completed in 1888 , they were shipped to Buffalo where they were installed in the mausoleum. Nelson was joined in the family mausoleum by his mother, Elizabeth Neff Blocher, who died of pneumonia at age 78 on March 31, 1904 and father John Blocher, who died of “old age” on June 30, 1911 at the age of 85. The Angel inside the mausoleum depicts the maid Katherine and the Blocher mausoleum can be located in the Forest Lawn Cemetery, in Buffalo, New York.