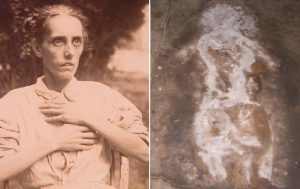 On December 1, 1978, a female psychiatric patient named Margaret Schilling disappeared from one of the wards at Athens Lunatic Asylum in Ohio. Margaret wasn’t a particularly troubled patient at the asylum, so she was given a certain amount of freedom to roam around the asylum and spent her days wandering the grounds, even going to town on her own from time to time.

However, on the 1st December 1978, she disappeared and a search party was quickly organized at the hospital, but days of searching proved unsuccessful in locating their missing patient.

On January 12, 1979, has been missing for 42 days, her body was discovered in the abandoned top floor of ward N.20, by a maintenance man, surveying an unused ward formerly dedicated to patients with infectious illnesses.

Behind the locked door where her body was discovered, were her clothes folded neatly on the floor, and Margaret Shilling’s naked body lying on the floor in front of a window. She’d somehow managed to get locked inside the abandoned room.

The official cause of death was heart failure, probably brought on by exposure from the cold December weather in what was an unheated section of the hospital. She had been dead for several weeks prior to her body being discovered and when found her corpse was found in such a bad state of decomposition that her body fluids had soaked into the concrete, and combined with the sunlight hitting her body in the process helped to create a permanent stain.

It’s worth pointing out that people with severe hypothermia, often strip naked, which is called paradoxical undressing. Shortly before death, the person will remove all their clothes, as if they were burning up, when in fact they are freezing.

After that, people began to see ghostly images of a woman staring down at them from the windows that belonged to the room she was found in.

Now, nearly forty years later, the stain left on the floor by the body of poor Margaret Schilling remains there to this very day, unable to be scrubbed away. For the students who share the building (a portion of which is now used as an art museum), the spirit of Margaret Shilling will occasionally make herself known through the rattling of a door handle echoing through the halls, a reminder of her eternal but futile attempt to escape from the locked top floor room where she was to perish.

People say that they can still sense her presence and sometimes see her walking around the halls. Some have even reported seeing random writings appear on the wall, one of which contained the message “I was never crazy.”

Theodore Coneys: The Dark Story of the Denver Spider Man