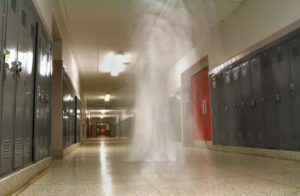 At the very crest of a hill on North Main Street in Wallingford, he gave the land where Moses Y. Beach School is located.

The claims of hauntings that flow from this very old site are almost too many to list.

Suffice it to say that the site appears to be a prime location of poltergeist activity, replete with blaring music, lights, fans and computers being turned on and off, doors and drawers opening and closing, as well as book carts from the library rolling down hallways and the sounds of footsteps late at night.

There is possibly even a history of full-body apparitions at the school as well as voices inside locked rooms or on the other ends of inactive telephones.

Moses Yale Beach was an exceptionally gifted man. He was an inventive genius, cabinetmaker and a successful newspaperman who gave back freely to his community. In a letter to the township in 1868, he wrote:

“I offer this lot through you to the Central School
District, as a gift, stipulating that it shall ever here-
after be used for educational purposes only.”

Upon this site in 1870, the first school was built. The Wallingford High School was a multi-story structure that appeared to be able to easily house two to three hundred students and staff.

According to some sources, the first tragedy to occur at the school was when a young student fell through the roof and was killed due to his injuries.

Later, in 1878, a freak tornado ripped through the region and, being that the school was situated on higher ground than most other buildings in the area, the school was reduced to rubble. According to some sources (those that have not been verified), this storm occurred on prom night in 1878.

The school was rebuilt and renamed North Main Street Elementary School. During emergency measures in the aftermath of a subsequent unspecified disaster, the auditorium of this newer school was actually utilized as a makeshift morgue (this story has actually been verified by newspaper articles at the time).

In addition to the varied poltergeist activity is the reported incident of neighbors calling the police in the late evening complaining of loud music and lights coming from the auditorium.

When the police arrived and entered the school, they approached the doors to the auditorium (which are situated directly opposite the front doors of the school as you walk in) seeing the lights beneath the doors, shadows flitting by, and hearing both the music and the voices.

When they opened the doors, the lights went out suddenly and the music abruptly ceased. It is for this reason that the police department no longer sends only one officer over to the school at night when someone complains of music or lights.

Additionally, the alarm company which maintains the security system refuses to dispatch a lone agent to the premises when a respondent is necessary (both of the above statements have been independently verified by informant sources).

Ghosts are tied to the location of their death, usually a sudden or tragic one, and they often don’t realize that they are dead. In most cases, they have unfinished business as the deceased person does not accept the way in which they died.

Most likely due to the tragic events in this school, the spirits are restless.