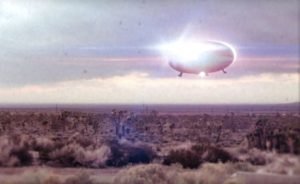 The Socorro UFO Encounter was considered by Dr. J. Allen Hynek, Blue Book’s scientific adviser, to be the Rosetta Stone of UFO cases. This UFO event was characterized by a close-encounter sighting of Lonnie Zamora, a Socorro policeman, and physical evidence left behind, comprising ground tracks and freshly burned vegetation.

The perplexing nature of the event led to investigations by the FBI, the US Army, and the US Air Force, with the latter admitting that a real craft was, in fact, involved in the incident, and they had no idea what it was.

The now famous Socorro UFO Encounter took place in Socorro; a small town situated about 80 miles from Albuquerque, in the US state of New Mexico. The event occurred early Friday evening, on April 24, 1964.

According to multiple reports of the original story recorded in 1964, city policeman Lonnie Zamora was patrolling Pack Street, just south of the town, when he was passed by a car that was over the speed limit at around 5:45 pm. When pursuing the vehicle, he heard a “roar” and noticed a bluish-orange flame in the southwest sky, about 0.5 – 1 mile away.

Policeman Zamora claimed that he could not focus on the ascending flame because his attention was on the road, plus the sun was in that direction, and he was wearing sunglasses.

His initial thought was that a local dynamite shack at the vicinity had blown, so he broke off the chase to investigate the source of the noise. A section of the dirt road was extremely rocky, and he had trouble going through it.

Driving very slowly, he got through the rough area, up the road leading to the top of the mesa overlooking the gully where the noise had come from.

Zamora claimed that he first saw the object through his window while driving towards the top of the mesa. What he saw looked like an overturned car, at a distance of about 150 yards. Zamora also noticed two “child-like” persons (small), dressed in white coveralls, standing beside the UFO. 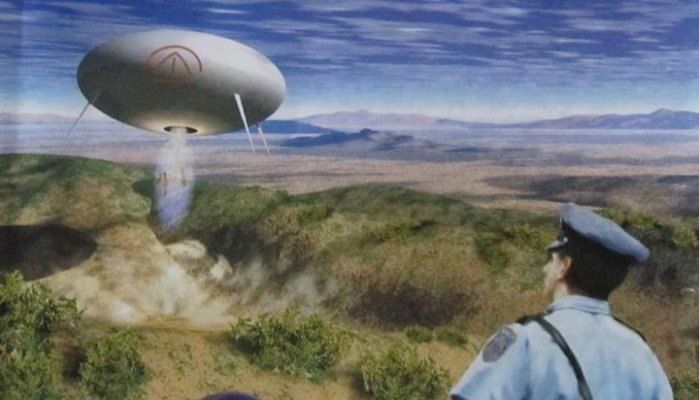 The two persons had their backs to him, though one of them turned his head and looked directly at him. He stopped his car at the top of the mesa and proceeded towards the gully on foot.

When he was about 50 feet from the UFO, he noticed that the object was oval-shaped and placed on “girder-like” legs, and the two persons were no longer outside the object. At that instant, he heard a loud roar and a bluish flame shot out from beneath the object, causing it to rise.

Zamora immediately ducked and lay on the ground, since he thought that the object would explode. When it failed to explode, he got up and ran further away to view the object from a distance.

According to Zamora, there was a whirring noise as the object rose to a height of about 20 feet above the bottom of the gulley – to about the same level as where the patrol car was parked – and its legs were no longer visible.

The noise suddenly stopped and the flame was no longer visible. With 20-25 feet clearance from the ground, the object started to move parallel to the terrain, accelerating for about two miles to the perlite mill. It then rapidly gained altitude before disappearing in the sky.

As soon as the object had taken off, Zamora radioed the sheriff’s office and asked the radio dispatcher on duty, Nep Lopez, to look out the window to see if he could see the object, but the dispatcher did not see anything.

The first person to respond was State Police Sam Chavez, followed closely by State Policeman ted Jordan and under Sheriff James Luckie. All three individuals arrived within ten minutes of the incident, allowing them to witness the smoldering bushes and fresh landing depressions.

By Saturday, the incident had been reported to Kirtland Air Force Base and White Sands Missile Range in Albuquerque, catching the attention of the military and Project Blue book personnel. At the same time, about half the town of Socorro had received word of the sighting, with many reporters and residents going to search for the landing site.

Investigators of the incidence reported that Zamora was a credible city policeman, and the physical evidence seemed to be genuine. The investigators analyzed a burnt branch from the bush, as well as a soil sample from the site of the impression, though nothing unusual was found. Radiation tests also revealed normal levels.

Some burnt weathered cardboard was also found on the site, which Dr. Allen Hynek, Blue Book’s scientific adviser believed had nothing to do with the case. Surrounding bushes also had cardboard or paper believed to have been deposited there by winds.

Something else that the investigators noted was that there were no tracks, suggesting that no vehicles had been in the area recently. This was a vital factor in proving that the incident was not a hoax.

Investigations by Blue Book left them with uncertainty, since they could not identify what exactly Zamora saw, but believed that it was not extraterrestrial. This is because the object seemed to demonstrate technology at the same level as that of the US space program.

They even proposed that it could have been a Lunar Excursion Module (LEM), similar to those found in the Apollo program, or an experiment by the White Sands Missile Range, though none of these possibilities yielded positive results.

Blue Book also took into consideration the credibility of Lonnie Zamora, being regarded as a serious policeman, a pillar member of his church, and a man who is well capable of identifying airborne vehicles in his region.

Sam Chavez, who arrived about two minutes after the object had taken off, claimed that Zamora was genuinely in a state of panic and bewilderment when he arrived, and Blue Book is also puzzled. In fact, Chavez has stated in other reports that he may have seen a flying object disappearing at a distance, though he has not mentioned this on the record.

After the incident, various witnesses sprang up, claiming to have seen the UFO that evening. One tourist, in particular, claimed that the object had flown over his car and landed at the gulley, and even mentioned it to the manager of Whiting Brother’s Service station located on 85 north.

Early skeptics of the Socorro UFO encounter argued that it was a massive gimmick to boost tourism. If this is true, then it was successful, since the incident became a chapter in the history of New Mexico, drawing numerous visitors to Socorro every year, though there is not much to see at the site, except desert.

Nevertheless, the Lonnie Zamora UFO incident has continued to be vital in UFO research, and every now and then, finds itself back in the media.

People continue to refute the incident, some claiming knowledge of the identities of the hoaxers but nothing other than indirect have yet to be produced. If this was a prank by hoaxers one can only hope they got jobs in the aerospace industry. SpaceX in particular could make good use of their talents.

The sighting was memorialized in 2012 by a mural placed a few hundred yards from the supposed landing spot.