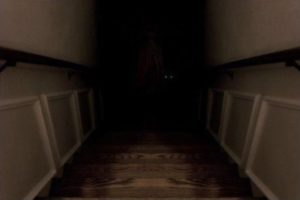 Years ago, my family went on a vacation in Cape Cod and we rented a small old house to stay in for two weeks. On the main floor was the kitchen, the living room and a bathroom. The bedrooms were on the second floor. There was a basement room downstairs, with a washer and dryer, a sofa and a television.

On the fist night, we were all awakened by a terrible scream from my sister’s bedroom. When my dad burst into her room and turned on the light, he found her sitting up in bed, screaming and crying. My parents sat with her and comforted her until she finally calmed down enough to tell them what had scared her.

She said that she had been awakened in the middle of the night by a horrible stench. When she opened her eyes, she had seen the entire bedroom soaked in blood from top to bottom. There was blood all over the floor, bloody handprints on the walls and blood spatter all over the ceiling.

We all thought that she had just been having a nightmare, but she refused to go back into her bedroom and stayed in our parents’ room for the remainder of the holiday.

One evening, my mother was cooking dinner in the kitchen upstairs and my father had gone out on an errand in a nearby town. My sister and I were in the basement room, watching TV, when all of a sudden, the lightbulb popped and the TV went off, leaving us in complete darkness.

The basement was unfinished and had old stone walls, making it a bit of a creepy place. For a few seconds, we just froze, not knowing what to do. Then we started to smell something horrible.

It was a terrible stench and when it hit our noses, we felt nauseous. It smelled like rotting flesh. The smell quickly grew worse and worse and then we just heard a scratching in the darkness. Something seemed to be scratching at the floor or the walls.

We screamed and began scrambling around in the pitch black, trying to find the door. Eventually, we managed to open the door and ran upstairs screaming to our mother.

We kept telling her about the disgusting smell and we heard something scratching and scraping around down there. My mother eventually agreed to go down to the basement, replace the bulb and check out the source of the horrible smell.

She took a flashlight and a new bulb and disappeared into the darkened basement, as we waited for her at the top of the stairs. We expected her to return quickly but she seemed to be down there for an eternity.

Suddenly, we saw her emerge out of the darkness and come running up the stairs. She slammed the basement door behind her and bolted it as fast as she could. She turned to us and we could see her face had completely drained of color. Her eyes were wide with fear and she just said “I don’t want you going down there again.” Then she went into the kitchen and called the police.

We overheard her conversation on the phone and managed to figure out that she’d seen someone down in the basement room. As we waited for the police to come, we huddled together in the living room, staring at the basement door. At any moment, we expected to hear someone banging on it or trying to break it down. My mother refused to tell us what she had seen.

When the police arrived, my mother greeted them at the front door and ushered them inside. She unbolted the basement door and they went down into the darkness with their flashlights out and their guns drawn. They searched the entire basement room, but found nothing. There was no other way out of the basement, no windows, no doors. Whatever was down there would have had to come up through the basement door.

After the police left, my mother finally revealed what she had seen down there in the pitch black basement room. As she spoke, she became very still and quiet.

She said that she had been changing the lightbulb downstairs, when she began to smell the horrible stench we had described to her. Then she started to hear a faint scratching noise. She shone her flashlight around the room and suddenly caught sight of something crouched between the washer and dryer.

It was a man, crouched on all fours. His clothes were tattered, his hair was wild and tangled, and his face didn’t look human. It was twisted in an expression of pure hatred. In that split second, he looked up at my mother, his eyes reflecting the beam from her flashlight. Then he suddenly crawled forward and disappeared through a wall. When my mother saw him simply vanish into thin air, she dropped the flashlight and ran.

After that, none of us would go down in the basement. We kept the door locked and bolted. Every night, we slept in our parents’ room and locked that door too. We cut our holiday short a few days later and just drove home.