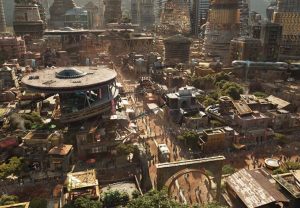 The Silurian hypothesis is a thought experiment which assesses modern science’s ability to detect evidence of a prior advanced civilization, perhaps several million years ago.

In a 2018 paper, Adam Frank, an astrophysicist at the University of Rochester, and Gavin Schmidt, director of the NASA Goddard Institute, imagined an advanced civilization before humans and pondered whether it would “be possible to detect an industrial civilization in the geological record”.

They wrote, “While we strongly doubt that any previous industrial civilization existed before our own, asking the question in a formal way that articulates explicitly what evidence for such a civilization might look like raises its own useful questions related both to astrobiology and to Anthropocene studies.”

The term “silurian hypothesis” was inspired by a 1970s Dr Who serial Doctor Who and the Silurians which featured a species called the Silurians.

According to Frank and Schmidt, since fossilization is relatively rare and little of Earth’s exposed surface is from before the quaternary time period, the chances of finding direct evidence of such a civilization, such as technological artifacts, is small.

“We are already a geophysical force, and our presence is being recorded in carbon, oxygen and nitrogen isotopes, extinctions, extra sedimentation, spikes in heavy metals and synthetic chemicals (including plastics),” Schmidt told Newsweek.

The human burning of fossil fuels, for example, is already having an impact on the geological record, despite industrialization only beginning around 300 years ago. What’s more, global warming, agriculture and the spread of synthetic pollutants are all making their mark.

So let’s imagine that, perhaps, some other species on Earth rose briefly to civilization millions of years ago, would there be any traces of them today, for example, fossils or the remains of buildings?

“Possibly,” Schmidt said, “but it might also be that all such traces have been ground to dust and that the only remaining traces are in the more subtle perturbations in geochemistry.”

In addition, “fossilization is extremely rare and very partial, so evidence could easily have been missed,” especially if a civilization had lasted just a few thousand or tens of thousands of years, much like our own.

After a great time span, the researchers concluded, we would be more likely to find indirect evidence such as anomalies in the chemical composition or isotope ratios of sediments. Objects that could indicate possible evidence of past civilizations include plastics and nuclear wastes residues buried deep underground or on the ocean floor.

Prior civilizations could have gone to space and left artifacts on other celestial bodies, such as the Moon and Mars. Evidence for artifacts on these two worlds would be easier to find than on Earth, where erosion and tectonic activity would erase much of it.

Frank first approached Schmidt to discuss how to detect alien civilizations via their potential impact upon climate through the study of ice cores and tree rings.

They both realized that the hypothesis could be expanded and applied to Earth and humanity due to the fact that humans have been in their current form for the past 300,000 years and have had sophisticated technology for only the last few centuries.