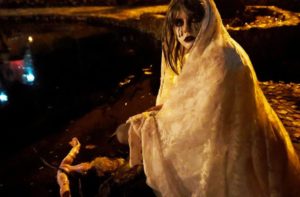 Bloody Bucket Road isn’t the real name of this sinister road in Wauchula, but that’s what everybody calls it because of allegations of what happened there many years ago.

There is also a bridge called Bloody Bucket Bridge that is connected to the story of this road, but whether or not any of the legend is factual or fiction is hard to determine.

This paved road runs south off of Main Street in Wauchula and in the daytime doesn’t really look all that threatening, but drive farther down this road and cross the bridge and things start looking a little different, at least in the moonlight.

If you keep going you will eventually come out on Route 64 that runs between Zolfo Springs and Avon Park. The road was once a dirt road called Rhinehardt or Reinhart Pass Road, and is said to be a hundred years old, which is a fact since it can be found on pre-1900 old maps.

Now you have the facts, but the rest of the story comes from locals who profess to have some knowledge about how the road got its creepy name.

Many years ago an ex-slave woman came down from Georgia with her husband and settled in Wauchula. She served as the midwife for the community and allegedly had delivered several hundred babies.

Being concerned that some families already had too many children to feed, the woman decided to help out by eliminating a few right after birth. She would smother the babies and take them down to the bridge and bury them in the woods along the river.

People became suspicious after so many babies had died while being delivered by her. Some said that she was deranged because she could not have children of her own or that her children had been taken from her while she was a slave.

After people refused to allow her to deliver any more babies the woman went crazy. She spent the remainder of her days a mad woman living in the Florida swamps, screaming that she was haunted by the ghosts of the babies.

She would sit in her home and listen to the cries of all the children that had perished by her hands. It is claimed that she could sit beside a bucket and it would fill with the ghostly blood of all the infants she had killed.

One day while emptying a bloody bucket in the river, the old woman fell in and drowned. For several days following her demise the river ran red with blood. That is how the bridge became Bloody Bucket Bridge and I suppose the name carried-over to the road.

The legend is that if you go down to the bridge after a full moon and gaze into the river, you will see that it runs red with blood. Some claim that you can still hear from the woods the cries of children.