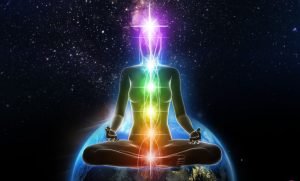 Chakras are commonly known as energy centers in the human body that relate to physical and mental well-being. But why are chakras so important?

Throughout human history there have been memorable figures in the form of mystics, seers, sages and philosophers, who have left a legacy of information that people now use in the twenty-first century.

These respected intellectuals discovered chakras through their study of the human body, through the power of dreams and visions, and simply through their own personal knowledge, perceived to be gifts from a higher or angelic realm.

Chakras have been interpreted by various mystics and seers as being the subtle energies in our bodies. There are several developed belief systems that explain chakras in the context of other philosophical backgrounds.

Ultimately it was generally agreed that wherever dynamic energies meet together in nature they form spinning patterns or vortices. These vortices have been labelled as chakras.

They can be seen in nature as tiny spiral eddies on the surface of streams and rivers, and on a larger scale in the movement of cloud systems and strong weather patterns.

Chakras were perceived by the seers of ancient India as the small spinning vortices of energy within the human body. The seers described these energies in the Vedas, the primary source of all Hindu cosmology and philosophy, which was codified at around 3000 BC.

The Vedic seers believed that wherever two or more channels of subtle energy meet, they produce a vortex. This vortex was called a chakra, which means ‘wheel.’

Upon further study, the India seers believed that there were seven main chakras in the human body. These occurred at the point where major energy flows coincide; that is the midline of the body in front of the spinal column. The Indian seers believed that these chakras seemed to mirror both health and the spiritual state.

The seven chakras that had been established were explained as multi-dimensional gateways which would allow a person to access different experiences and states of consciousness.

To invigorate or activate these chakras, a person would be advised to use meditation, visualization, sound, chants and exercise. The seers believed that such activities would activate, cleanse and integrate the seven chakras. 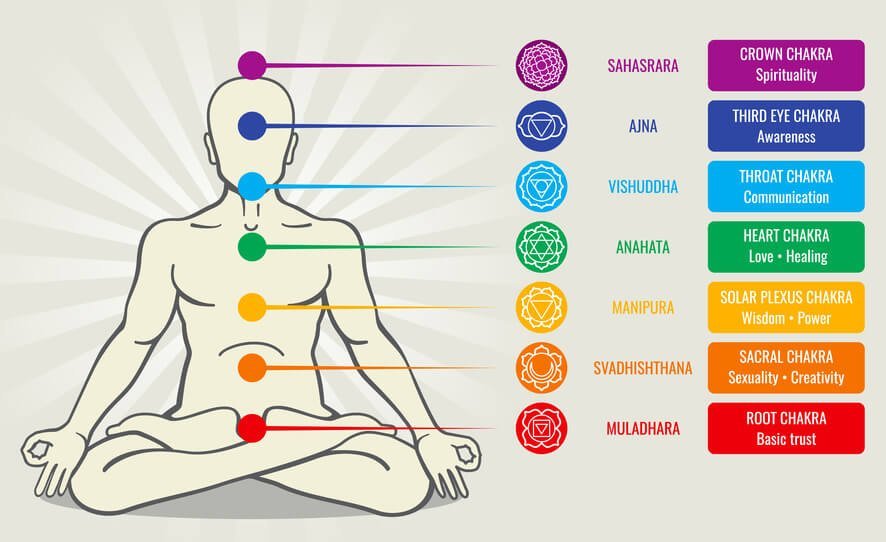 Chakras are perceived using imagery that was established by the Vedic seers in ancient times. Of course, individuals have also assigned their own personal interpretations of the chakras, but their purpose is generally explained in the following terms:

Muladhara is known as the base chakra. Its name means ‘foundation’ and it is shown in texts as having four vermillion petals around a yellow square.

Svadistana is known as the sacral chakra. This one means ‘sweetness’ and has six red petals in the Vedic texts. It represents the water element.

Manipura is known as the solar plexus chakra, whose name means ‘city of gems.’ This is shown with ten luminous blue petals surrounding a downward-pointing red triangle, which symbolizes the fire element.

Anahata is known as the heart chakra. It means ‘unstuck’ and is represented by twelve deep red lotus petals surrounding a hexagram of grey-green, which symbolizes the element of air.

Vishuddha is known as the throat chakra, which means ‘pure.’ This is represented by a circle of sixteen lavender or smoky purple petals enclosing a silver crescent, along with the white circle of the full moon. It represents space, and pure cosmic sound.

Ajna is the brow chakra, which means ‘command.’ It is shown as two petals of luminescent pearly blue, and within a white column is a representation of unified consciousness. This represents a combination of the male and female deity.

Sahasrara is the crown chakra, the ‘thousand-petalled’ image at the top of the head. It is sometimes described as formless, or sometimes as a moonlike sphere, and it is believed to be a gateway to the ‘higher self.’

Chakras are often associated with meditation in modern living, as it is perceived that people open up their chakras through visualization and meditation exercises.

As an aspect of the popular practise of holistic health, chakras need to be clean, refreshed and revitalised to support a healthy human body.

They continue to be a source of intrigue and mysticism to many people in the Western world, but a belief in their importance to human health seems to be building with the rise in holistic health practitioners and people looking for assistance beyond the world of scientific medicine.

What is the “Third Eye” and Do You Have One?

Each Tear Under The Microscope Is A Unique Emotional Story