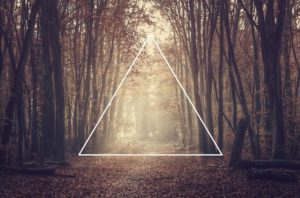 “Bennington Triangle” is a phrase coined by New England author Joseph A. Citro to denote an area of southwestern Vermont within which a number of people went missing.

Frieda Langer went missing on October 28, 1950. Like dozens of others before her, Frieda disappeared as completely as if the Starship Enterprise had beamed her up.

On that autumn day, Frieda and her cousin set off walking from their camp in the wilderness near Glastenbury Mountain.

The sun shone from close to the horizon and the air held a pungent taste of the coming winter. Everything seemed normal and serene until Frieda abruptly vanished from the wooded track.

Despite several inch-by-inch searches of the area, no trace of the young woman could be found. Then seven months later her body appeared, lying on the track from which she had vanished. She wore the same clothes, the body had not decomposed and no cause of death could be determined.

At least Frieda did return eventually, albeit dead. In most other Bennington Triangle cases the victims were never found. They disappeared from their gardens, from their beds, from petrol stations, from log cabins. One man, James Tetford, even vanished while sitting on a bus.

That disappearance, on December 1, 1949, involved a fiercely-skeptical man who had always scoffed at the idea of anything supernatural. Whether he changed his opinion we will never know.

After visiting relatives in St Albans on a frosty afternoon, Mr Tetford boarded his return bus for the journey to Bennington where he lived in the Soldiers Home. There were 14 other passengers on the bus as it drove into Bennington, and all of them testified to seeing the ex-soldier sitting in his seat dozing.

However, when the bus reached its destination five minutes later Mr Tetford had vanished. His belongings remained in the luggage rack and a timetable lay open on the seat where he had been sitting. Of the man himself, there wasn’t a trace. He has never been seen since.

His disappearance came three years to the day after an equally weird vanishing act. Eighteen-year-old student Paula Welden set off for a stroll on the Long Trail into Glastenbury Mountain followed by a middle-aged couple 100 yards behind.

The couple saw Paula follow the trail around a rocky outcrop and out of their sight. When they reached the outcrop themselves she had vanished and no one has seen or heard of her since. She had become yet another statistic of the Bennington Triangle.

The Youngest known victim of the Triangle was eight-year-old Paul Jepson whose disappearance occurred 16 days before that of the hiker Frieda Langer.

Paul’s mother, a caretaker, left him playing happily outside a pigsty while she went inside to tend the animals. When she re-emerged the boy had vanished, and as in most other cases no trace of him has ever been found despite exhaustive searches.

In 1975, a man named Jackson Wright was driving with his wife from New Jersey to New York City. This required them to travel through the Lincoln Tunnel. According to Wright, who was driving, once through the tunnel, he pulled the car over to wipe the windshield of condensation.

His wife Martha volunteered to clean off the back window so they could more readily resume their trip. When Wright turned around, his wife was gone. He neither heard nor saw anything unusual take place, and a subsequent investigation could find no evidence of foul play. Martha Wright had just disappeared.

So where did these and so many other people go, and why did this seemingly-innocuous part of America close to the Canadian border become the focus of sinister activity?

No one has an answer to either question, but it seems the areas’ malign reputation goes back a long way. It is known, for instance, that in the 18th and 19th centuries American natives shunned the Glastenbury wilderness, believing it to be haunted by evil spirits. They used it only as a burial ground.

According to native legend, all four winds met in that spot something conducive to out-of-this-world experiences. The natives even believed the wilderness to contain an enchanted stone that would swallow anything that passed by.

Just superstition? That is what the first white settlers thought, and what they went on thinking until their friends and families began to disappear.

The Real-Life Story of the Haunted Victorian-Style Mirror