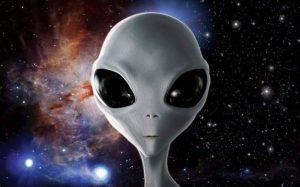 Bacterial life may be common in the universe, with Earth’s amino acids having cosmic origin. But intelligent life? Some astronomers think it’s worth a look.

Life is everywhere, even in “outer space.” Eight of twenty amino acids known on Earth are found on meteorites or interstellar clouds.

A meteorite, apparently from Mars, is suggestive of long ago bacterial life there: polycyclic aromatic hydrocarbons, in a form suggesting “biological origin” (coming from a decaying organism), were found on the meteorite, surrounded by mineral alterations which may have been caused by primitive bacteria. The meteorite also has what might be actual (albeit tiny) fossils of the bacteria.

It’s possible that bacteria on Mars and Earth share common origins, with the bacteria, or at least its building blocks, exchanged via meteorites. Peter Ward notes in Rare Earth that bacterial life is probably quite common in the universe. But what about intelligent life, such as a lizard or, say, a space alien? While Ward is skeptical, others search.

The Search Is On: SETI

SETI may be the first institute to have sought “artificial” radio signals (as opposed to natural celestial body radio emissions) coming from the stars, boosted by some NASA funding in the 1970s and 1980s.

Alas, the NASA-funded SETI “Project MOP” (which conducted a microwave survey of the sky and also a targeted search of 800 stars; these later metamorphosized into “Project Phoenix” and “Project Argus”) got ridiculed by Congress in the 1990s, and thus lost funding. More SETI funding was lost to budget cuts in 2006.

Today, based in Mountain View, California, funded not by NASA but by private venturers like Paul Allen (who started supporting it in 2001) and others largely in Silicon Valley near SETI’s current home, SETI uses the Allen Telescope Array to gather radio data from various points in the universe.

The telescope array, a joint project of SETI and the Radio Astronomy Laboratory (University of California, Berkeley), also gathers data on black holes and dark matter. (Dark matter data may reveal whether the universe is unpopulated enough to expand forever or whether it will one day close back in on itself.)

The array however was shut down all summer, from the end of April to early August, due to lack of funding. SETI also relies on the computers of thousands of volunteers to analyze its celestial radio data.

To support life, stars need to burn the “right fuel.” The right fuel is believed to be hydrogen, which is what our sun burns. Hydrogen gives light, including the light humans see in the visible spectrum, and heat for life, and tends not to burn up instantaneously in fusion.

Stars also should be the right temperature and distance from the planet, so as to permit the existence of liquid water. According to Ward again, a space called the “habitable zone” can support “the presence of liquid water on a planet’s surface for hundreds of millions of years – the time-span probably necessary for the evolution of life.”

Stars should also contain metals and other elements believed essential to life (at least life as we know it; typically, planets get their metals from the stars they orbit). And stars need to be the right age, giving planetary life time to evolve. 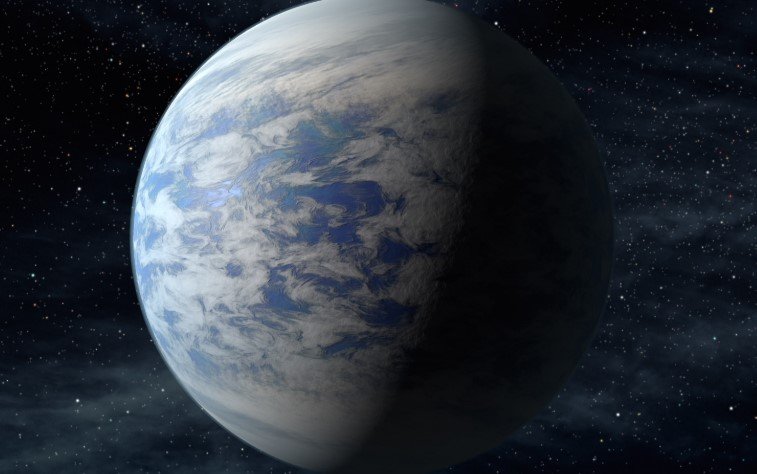 The above criteria ignore some unanswered questions. First, could not a more massive planet support liquid water at higher temperatures than on Earth? Of course, such a planet would need to be protected from meteorites and such by some still more massive outer planets, perhaps.

Secondly, the elements carbon, calcium, phosphorous, iron, oxygen, sodium, potassium, and chlorine, plus a few others, play major roles in life on earth. Water also is essential to the formation of DNA and RNA, building blocks of life on earth. But what about life without liquid water? Is it possible?

Cellular reactions occur in solutions of water. Nevertheless, there’s speculation that life might survive some places where water is not liquid, on other substances. For example, Saturn’s moon Titan has a methane – ethane cycle much like earth’s water cycle, while its surface water is frozen, according to Henry Bortman (2010), into rocks “as hard as granite.”

A small-scale (and less-expensive than the current Jupiter probe) lander, the “Titan Mare Explorer” may launch for Titan in the next few years, arriving as early as 2022 or 2023, to analyze Titan’s methane and ethane lakes, in search of elements making up their chemistry.

If any elements are “more abundant than expected,” this could be a sign of life, according to mission co-investigator Lunine (quoted by Bortman), who explains that, if chemistry in Titan’s lakes suggests life, perhaps “. . . life . . . must be a common outcome of planetary processes . . . .”

Titan’s atmosphere is methane-rich, but, like Earth’s, it’s also nitrogen-rich. A liquid ocean about sixty-two miles below Titan’s frozen surface was predicted by the Cassini probe in 2008. The probe found “prominent surface features” apparently moving in a way only explicable by an ocean.

Liquid water and ammonia (or ammonium) apparently spew, at temperatures of around 90 degrees below 0 (Celsius), from Titan’s vents. (Note: ammonium, is an ionized nitrogen hydrogen compound; ammonia a non-ionized one; ammonium is less harmful to aquatic life.

As water temperature drops and/or as water’s ph lowers, ammonium, not ammonia, is what’s found dissolved, according to John Sawyer, who discusses ammonia and ammonium in crop management on Earth.)

According to Science Daily, “[i]n a now famous experiment, over a half-century ago, Stanley Miller and Harold Urey showed that amino acids were synthesized by simply creating lightning-like electrical discharges through a fog of water, methane and ammonia . . . .”

But water is part of the mix and it has some unique properties at temperatures near Earth’s that can’t be exactly duplicated by substances like ammonia.

Water Versus Ammonia (or Ammonium)

Nevertheless, ammonia, toxic at normal temperatures, is not always a poison. Both water and ammonia (or ammonium; ammonium is more common in cold water) are stable at lower temperatures. Both are solvents too, but what each dissolves varies: ammonia dissolves organic compounds such as esters more readily than water does, but may dissolve minerals less readily, and may react with some metals. Ammonia also readily forms a salt with chlorine.

While pure water is an insulator, water ionizes. Ammonium (but not ammonnia) likewise is ionized, and may act like a metal under high pressures. Water and ammonia/ammonium form and break hydrogen bonds (water more so, however).

Perhaps there is life in Titan’s beneath-the-surface ocean. If the ammonium is conductive enough, perhaps amino acid chains like those in DNA and RNA form at incredibly high rates. Were the Greeks right? Is Saturn the father of the gods?

A criterion needed to support higher planetary life is space safe from collisions with meteorites or comets (otherwise evolution might be impossible).

What’s needed is perhaps planetary space in a “life zone” surrounded by more massive outer planets (to attract/buffer debris from space), with a solar system in a galaxy containing enough stars to keep temperature from dropping suddenly but not so many that stars frequently collide. 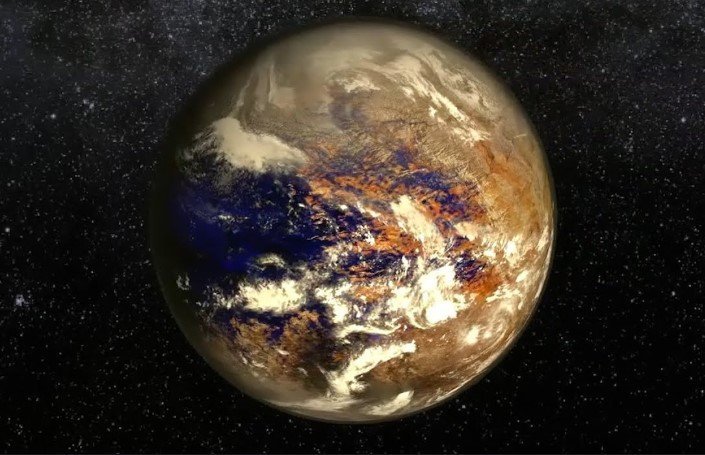 Stars meet these criteria perhaps in the constellation Cygnus (“The Northern Cross,” made famous in the film, “Contact”), which houses Kepler-22b; in our neighbor galaxy Andromeda; and finally right next door, four light years away, in the triple star cluster “Alpha Centauri.” Alpha Centauri lines up on the Earth’s axis in the direction of the South Pole (and we thought Santa lived to the North).

There seem to be life zones around these, even with the varying heat a planet would get over the two’s eighty-year rotational period (enough variation to make weather cycles interesting?).

Life On Our Next Door Neighbor? And Intelligent?

These two have in fact all five criteria for supporting planets with life, and have been around a bit longer than the sun, giving intelligent life perhaps more than enough time to evolve. Alpha Centauri B is an orange star, slightly cooler than our sun; it’s companion Alpha Centauri A is slightly larger and hotter.

Of course, it’s not even known if planets, even more massive ones (without which inner planets might be pelted by comets and asteroids), orbit these. Nevertheless, University of California models of Alpha Centauri B’s likely evolution suggest rocky earth-like planets may have formed in its habitable zone.

According to Michael Richmond, “[t]he search for planets today involves the search for changes in a star’s radial velocity signifying a planet’s orbit’s gravitational effect.” Some planets have been found this way according to Richmond: “[o]n October 6, 1995, Michel Mayor and Didier Queloz announced that the star 51 Pegasi, in the constellation Pegasus, also located in our relatively nearby galactic neighborhood, was wobbling due to the motion of a planet orbiting it.”

Physiology of a UFO Builder/Pilot

For visits to Earth such as those described (wildly or not) in for example the “Hill Aliens” story, life must be mobile, able to leave its planetary home, and manipulate tools, with perhaps an opposable thumb and hand.

And, to avoid collisions and aim at a target, travel requires stereoscopic vision or some other stereoscopic sense (both require balance: two eyes or other organs are needed for stereoscopic perception and some form of balancing a body is required if limbs manipulate tools).

And, of course, there is a need for a brain capable of a certain level of communication, whether or not speech, writing, or hand signs are the media over which communication occurs.