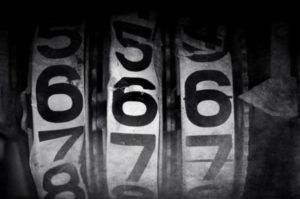 The number 13 often sends people running, but it’s not the most hated number. Few numbers will evoke such reactions as a set of triple sixes. With all its religious connotations and horror movie associations, this number can bring some serious chills and thrills.

In grocery store people running through the express lane will buy something else just to avoid a tab of $6.66. Hotels, offices and apartment buildings will usually avoid labeling unites 666. On the flip side, people who love “evil” sounding things for shock value will use 666 at the end of their online screen names or draw it on walls.

Are all these scary associations warranted? What’s the deal with this number? Let’s explore.

ROOT OF THE EVIL

For a long time, Christians have associated the number 666 with the ‘number of the beast’. In the Bible, the Book of Revelation was read to say:

“Here is wisdom. Let him that hath understanding count the number of the beast: for it is the number of a man; and his number is Six hundred threescore and six (Revelation 13:18; KJV).”

According to some Christians, the mark of the beast will herald the end of times with the rise of the antichrist. People will begin to willingly take this mark on their foreheads or their hands, and this will bring about the second coming.

Occultist Aleister Crowley played further on people’s fears. He had a passionate hatred for Christianity due to a particularly fundamentalist upbringing and sought every opportunity to exploit their fears. He called himself The Beast 666. This is one of the reasons Crowley is often mistakenly thought to be a Satanist.

After that came exploitation of the number by popular fiction. This was particularly prominent in the 1960’s and 70’s with horror movies and books that fueled hysteria about secret Satanic cults and antichrist figures being around every corner. The numbers 666 became a convenient way to get a reaction out of an audience—the general public was essentially responding to it with fear of evil, fire and brimstone like Pavlov’s Dog drooled when bells rang.

The number value of 666 in Greek actually translate to both “Jesus” and “God is Zeus.”

Further, Bible scholars believe that ‘the Beast’ mentioned in the Book of Revelation was actually a contemporary figure—Nero, who’s name translates to both 616 and 666. He was known as ‘the Beast’.

Crowley also knew that in Thelema, 666 was the sum of the numbers in the Sun square, a magical symbol. It is considered a solar number and a positive symbol. Still, it freaked out conservative Victorian Christians, which made it all the more appealing to Crowley.

But after years of religious evangelism, horror stories, attention seekers like Crowley and a couple of decades of the Internet pounding this ‘evil number’ into our psyche, it’s just not a mistake that many people willingly accept. We would have to change too much and admit too many flaws in previous rationalizations, so a lot of people would just as soon ignore this new information brought to light.

Psychic Numerologists have come to find that the numbers 666 have a definite meaning, but it’s not the one that people have so long feared. These numbers generally come into play wan things are unbalanced and overly-focused on the material.

These numbers can show up in your life when you’re putting your head too far above your heart. You’re not thinking clearly and need to stop and try to find balance again. You also need to stop gathering, buying or collecting things– what you really need cannot be found in them. What you need can be found within. You have to strive for emotional balance. So while these numbers do provide a warning, you need not fear them as you might have in the past.