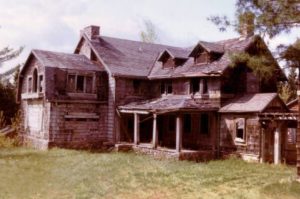 It’s often called to the most haunted house in Wisconsin, but was Summerwind, also known as the Lamont Mansion, really haunted or is it just many years of rumor and legend? While there have been many reports of what may be paranormal activity over the long history of Summerwind, there are also many questions that allow one to doubt the story as a whole.

Summerwind, located on West Bay Lake in North East Wisconsin, was built in 1916 by then U.S. Secretary of Commerce Robert Lamont. The house was to serve as a Summer home for Lamont and his family, an escape from the busy life in the nation’s capitol. Not long after moving into the home the maids at Summerwind began to talk about seeing ghosts in the house.

Robert Lamont did not believe the stories, not because he didn’t believe in ghosts but because the house was new. Lamont’s view of things changed one night when the family was in the kitchen. A door leading to the basement began to shake and then opened. Standing in the doorway was an apparition, clearly seen by Lamont and others. The door then closed and Lamont pulled a pistol and fired two shots into the door. Shortly after the incident the Lamonts left the house and never returned.

What happened next is a bit hazy. What we do know is that at some point during the 1940’s, Summerwind was sold to the Keefer family. The Keefers never lived in the house on a full-time basis but kept up the home. When Mr. Keefer died the property was divided into several lots and the property on which the old Lamont Mansion was located was sold. The Keefer estate sold Summerwind several times but none of the buyers were able to make the payments and the property was returned to the Keefer estate.

No paranormal activity was reported at Summerwind since the Lamonts lived there other than a general feeling of uneasiness until the home was purchased by Arnold and Ginger Hinshaw in 1969. By that time the home had fallen into disrepair and needed major renovation.

The Hinshaws reportedly had difficulty finding people to work on the home because of its reputation and decided to do the needed work themselves. The renovation to the house seemed to stir up long past problems at Summerwind. The Hinshaws reported seeing shadow figures roaming the hallways, quiet voices, problems with electrical and mechanical devices and seeing the phantom figure of a female in the dinning room on many occasions.

One of the most problematical claims made by the Hinshaws was the discovery of a secret room behind a closet with built in drawers. Arnold Hinshaw pulled out one of the drawers and found the room. Later that day they sent one of their children through the small entrance where she found a human corpse. They never reported the find and left it where it was. While this part of the story appears unlikely, within six months Arnold Hinshaw suffered a nervous breakdown and Ginger attempted suicide. Arnold was committed and Ginger moved in with her parents and eventually divorced her husband.

Years later Ginger Hinshaw’s father, Raymond Bober, announced that he was buying the Summerwind property and turning it into a restaurant. Supposedly Ginger had never told her father about finding the human corpse in the secret room. At that point she felt she had to reveal the find to her father as soon as possible. Raymond and his son went to the secret room but found no sign of a body. Mr. Bober claimed that the size of the rooms in Summerwind would change as he worked on blueprints for renovations, but he appears to be a rather dubious individual, attempting to build the ghostly reputation of Summerwind for his new restaurant.

Bober went on to claim that he had been contacted by the spirit of a man named Jonathan Carver. According to Bober, Carver was a man who was deeded the property by the Sioux Nation and was responsible for the haunting of the Summerwind property. Bober wrote a book about his reported experience at Summerwind but he appears to have been clearly just trying to make money.

In 1986, a group of Canadian investors purchased Summerwind. Whatever their intentions were as far as developing the property ended in June of 1986, when Summerwind was struck by lightning and burned to the ground. Today all that remains of Summerwind is the foundation and the forty-foot chimneys.