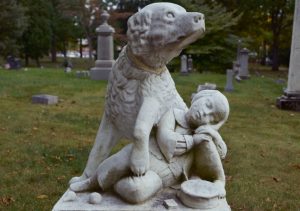 Johnny Morehouse was born in 1855, and was the youngest son of John and Mory, with the family living in the father’s shoe repair shop.

In 1860 five year old Johnny was playing with his constant companion along the canal near his home at the corner of East 3rd and June Street when he lost his balance and fell into the water.

The dog, whose name has been lost to history, lept into the canal in a desperate attempt to rescue his friend but by the time he pulled young Johnny out of the water it was too late.

After his burial, the dog laid on Johnny’s gravesite and wouldn’t be moved, staying by his deceased master morning, noon and night.

Visitors to the cemetery started to become worried about the dog’s well-being and would leave him bits of food, but eventually he died from a combination of starvation and a broken heart.

In 1861 a local sculptor, Daniel la Dow, created this monument to commemorate Johnny and the special relationship and devotion he and his canine had for one another. 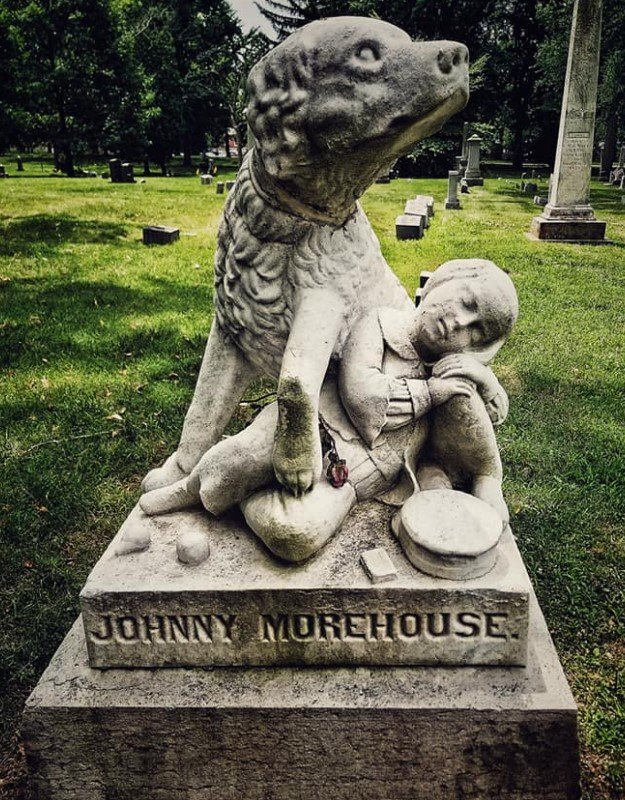 Aside from his one true companion and the words “slumber sweet”, the tombstone also features the ball, top, mouth harp and little cap that were found in Johnny’s pockets when his body was discovered.

Much like Greenlawn Cemetery’s Georgie Blount, visitors touched by this heartwrenching story bring small toys and other trinkets to decorate the grave marker. This is discouraged as such items cause degradation to the stone and are removed by cemetery staff.

Was death the end for these two chums whose bond was so deep that even a tragic accident couldn’t keep them apart? Maybe not.

Curiously, some who visit the grave have reported seeing the dog’s statue breathing. Now they say that Johnny and his dog, reunited beyond the grave, roam the cemetery after hours.

On occasion, visitors have even reported feeling short bursts of warm, damp air escaping from the dog’s nostrils when they hold their hand up to the snout in an effort to determine if their eyes are playing tricks on them.

It’s also not uncommon for folks to hear barking in the vicinity and more than a few graveyard guests have caught a fleeting glimpse of a little boy in suspenders as he darts from behind one tombstone to another, a little boy who, whether in spirit or in stone, gets to spend eternity with his best friend, his dog.

Barking is heard in the vicinity of the grave, and the two of them are spotted sometimes inside the perimeter fence.

This unusual Tombstone can be found at the Woodland Cemetery and Arboretum, Dayton, Montgomery County, Ohio.