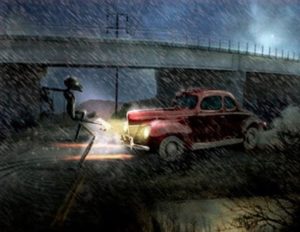 Stories of strange and weird phenomena are by their nature filled with weird occurrences and odd coincidences. So it may come as no surprise when certain names of people and places seem to re-appear over and over again when discussing these stories.

For example, “Devil” or its derivatives appear in countless locations where ghosts, goblins, and boogeymen have lurked. California has several “devil” locations including Devil’s Knoll, Devil’s Gate Reservoir, Mount Diablo, and Devil’s Hole. One such name is Wetzel.

According to weirdca.com on Saturday, November 8, 1958, one Charles Wetzel was near Riverside, California when he encountered a strange bipedal, reptilian-like creature. He was driving on North Main Street and had arrived at the Santa Ana River which had overflowed its banks when his radio station suddenly went out. Changing stations didn’t help.

Then a six-foot-tall creature with scaly skin, no nose, no ears, florescent eyes, and a beak-like mouth emerged and attacked Wetzel’s car. Wetzel later described it as having a “round, scarecrowish head like something out of Halloween”.

It was further described as having scaley, leaf-like skin, two long spindly arms, and its legs grew out of its side instead of from underneath its torso.

As it clawed at his windshield, he stomped on the gas, causing the creature to fall off the hood and under his car. Not caring about the monster, he blatantly ran over it. The creature scrapped against the bottom of the car.

Police tests would reveal that something had indeed rubbed against the underside of his car, but police dogs later brought to the area found nothing. Although the next night, another motorist was frightened by something not far from the site of the attack and reported to the police that something dark had attacked him near the area.

But the only real evidence of the creature’s existence was the clawed windshield of Charles Wetzel’s car. Since then, except for the 1970s discovery of Bigfoot tracks in the area, the location has been relatively quiet.

18 years after the incident, 21-inch footprints believed to possibly belong to Bigfoot appeared in the Santa Ana River Basin.

The case is even more bizarre when one considers that on July 28th of the same year, another Charles Wetzel encountered what appeared to be a six-foot-tall brown kangaroo in Nebraska. This Wetzel wasn’t the only one who saw such a creature in the area.

Other kangaroo sightings appeared around the same time as far as 100 miles away. The sighting so profoundly affected Charles Wetzel that he named a beer for it at the brewery he operated: Wetzel Kangaroo Beer.

So was Charles Wetzel’s reptilian attacker a relative of the Lizard People presumably living under Los Angeles?

Or was it a real-life Creature from the Black Lagoon? And what are we to make of the phenomenal coincidence of the Charles Wetzel seeing a kangaroo in the same year?