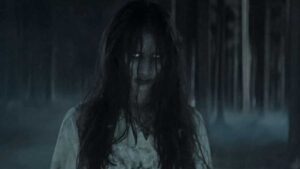 For many years after her death, the ghost of an eccentric, scrawny widow named Cassie Foster was seen haunting the westernmost stretch of White Deer Valley near Elimsport. Supposedly, she was unable to rest in peace because she was buried in the wrong grave.

The earliest accounts of posthumous Cassie Foster sightings are from 1902, just a few years after her emaciated body was found inside the primitive hovel she called home, at the foot of the mountain that divides Elimsport from Collomsville.

Cassie first arrived in Pennsylvania after the untimely death of her husband, who was a wealthy farmer in the Midwest. She settled in White Deer Valley and purchased twenty acres of timber land, upon which she built herself a two-story log cabin.

A lover of nature and wildlife, Cassie shared her home with a flock of pigeons, which she had trained to roost upon the foot of her bed.

She also kept several snakes as pets; one, a four-foot-long blacksnake and another a deadly copperhead which she had (according to newspaper accounts) “petted and fed into a condition of docility”.

Not all slithering creatures were treated as well by the old recluse, however. On one of the window ledges in the attic bedroom of Cassie’s cabin was a deep axe mark where, with one swift blow, she had decapitated an enormous snake that had attempted to gain entry through her bedroom window.

She later told a neighbor, “I could hardly kill the kill the poor thing. It looked so pitifully at me!”

Cassie’s body was discovered one day by two farmers’ wives who had decided to pay a visit to the cabin because they had not seen the ornery recluse for a while. The door stood open when they reached the cabin, the old woman’s shoes stood on the floor, but there was no sight of Cassie Foster.

One of the farmer’s wives climbed the stairs to the attic bedroom and found the old woman dead in her bed, her withered body and face having taken on the appearance of a mummy. A dozen rats scampered from the bed and when the men of Elimsport arrived at the cabin to take control of the situation, they discovered– to their horror– that the rodents had eaten her ears, fingers and toes.

A coroner’s jury inspected the cabin and viewed the old woman’s remains, and concluded that she had died of starvation. When they turned over the body an old, dirty envelope fell out of Cassie’s clothing.

The packet was found to contain $300, which was a considerable sum of money in those days. Why she had chosen to starve herself to death remains a mystery.

Nonetheless, because of its advanced state of decay and ungodly stench, the corpse was ordered to be buried at once, and was promptly deposited in a grave at the Elimsport graveyard.

Three days later, after word of the eccentric widow’s death had reached Williamsport, it was discovered that Cassie had a will drawn up about a year before her death.

But the final clause in her will stated: “My body shall be buried at a point a few rods northeast of my house, on a knoll where stands a chestnut stump surrounded by a group of chestnut saplings, which group is all the monument I require, my body to be encased in a metal casket.”

Unfortunately, Cassie Foster had been buried days before her last will and testament was discovered and read. And while her bones still rest in the cemetery at Elimsport, Cassie’s soul never found peace.

Shortly after her burial people passing the old woman’s cabin at night began seeing strange lights shining through the windows, and they claimed to have heard the murmurings of an old woman in prayer.

Several credible witnesses claim to have encountered Cassie’s ghost on the old road from Elimsport to Collomsville. The last recorded sighting of Cassie Foster’s ghost took place in 1905, when the apparition of a scrawny, aged woman was seen by a traveler coming over the mountain on his way from Collomsville.

The traveler claimed to have seen the ghostly form distinctly and, at one point, the spectre made its way to the entrance of the abandoned log cabin. The ghost then waved its arms as if it were about to fly before vanishing into thin air.