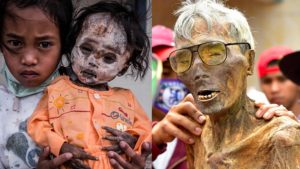 If you think that this walking corpse is the fantasy of a Hollywood make-up artist, then you are deeply mistaken: it is not an actor, but a completely ‘ordinary’ resident of the village of Tana Toraja.

According to the inhabitants of this Indonesian village, with the help of very ancient black magic, any homo sapiens who went to the another world can be revived by turning them into zombies… and without all the ensuing consequences, including devouring the brain.

In addition, the Torajians argue that they can easily raise the dead from their graves, and this is not a metaphor.

Reading about the burial rites of Toraja, I came to the conclusion that there are two different theories explaining why zombies are so popular in this region.

The first is that, according to local belief, the dead should be buried in the land where he was born, not where he died. Therefore, if the deceased has gone a decent distance from his family nest, then his relatives would be much more profitable to pay the shaman, who possesses black magic, to revive the deceased and make him walk back on his own.

And the second is financial. In the old days, burial in Indonesia was ‘not cheap’ pleasure, so the dead were turned into zombies so that they could help with household chores and carry out minor tasks until the amount needed to buy a coffin is accumulated. 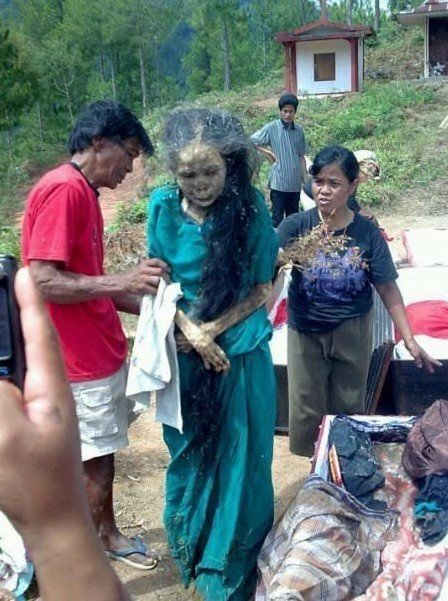 It is difficult to believe in it, but how to explain the above photo, where the shaman supports the hand of unsure but still a self-standing woman who apparently died about 6 months ago.

“At first, we thought it was part of a tour of the village of Toraja and in front of us is a disguised actor. However, very soon the laughter and cries of delight were replaced by silence”, – says photographer, who wished to remain anonymous.

“From her emanate a smell, from which watery eyes, and in the stomach unfolded the Third World War. The shaman was holding the dead woman, by this time, no one from the tourist group had any doubts that she was really dead, she lazily shook her head and tried to say something, but only opened her mouth, from which there was a vague hiss.”

Villagers say that the ability to raise the dead from their graves was inherited for them from their ancestors, who were all-powerful shamans, and for a generous reward they are ready to demonstrate all their skills to anyone who wishes.