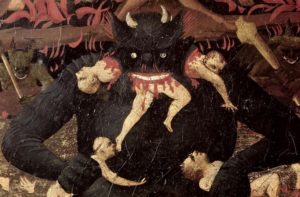 200 years ago, one of the most terrifying stories to ever take place began in the town of Wilmington, NC. It begins with a group of young rich kids taking a gag way to far, and ends with the Devil taking ownership of their souls.

The other members of the town knew what these kids were up to but could do nothing about it as their families owned most of Wilmington.

The leader of this merry band of spoiled rich kids was Lecter Daniels, a handsome young man who had a brilliant mind, but whom was also expelled from UNC at Chapel Hill for the type of parties mentioned earlier.

He moved back home and his father immediately made him a partner in the family business. With little to keep him occupied, Lecter had an idea in early April as he saw other residents preparing for the holiday.

“We could have a ‘Last Supper’ of our own.” Thought Lecter. He quickly gathered a list of his friends who, for one reason or another, would stand in nicely for those who attended the original Last Supper. When the roles of the Diciples where filled, Lecter decided he himself would play the role of Jesus.

Renting out the top floor of the nicest brothel in Wilmington, the boys were smart enough to keep their plans hidden from the madam, Belle. While Belle was a prostitute, she did have a religious side and they knew if she found out about what they were planning, she would’ve denied them use of her house.

When the day of April 19th arrived, the hall was cleaned and polished to absolute perfection. There were new linen tablecloths and fresh candles and the Chandeliers were almost glowing themselves. The food was astonishing in both quality and quantity.

The boys spared no expense. There was suckling pig, seafood of every kind imaginable, and wild turkey. And alcohol was flowing like a river. Kegs of rum and an ocean of champagne.

By 10pm all the guests were there. None were sober, but some more sober than others. As the night passed the stories and speeches contained more foul language and the jokes were getting more offensive. Sometime between midnight and the next morning, the climax came about for the party.

Lecter, far from sober staggered to his feet, a crown of woven smilax on his head raised his glass to propose another toast… it never came. An expression of unimaginable horror came over Lecter’s face. His wine glass shattered in his grip, blood began to pour from his hand on to the new tablecloth.

The room fell so silent, candles could be heard flickering at the other side of the room. Then Lecter spoke. Only it wasn’t Lecter’s voice. This voiced sounded evil, sinister with undeniable authority. Each word was pronounced with careful clarity. “Dead in six months” and again “Dead in six months”.

Lecter screamed and ran out of the room and out of the house, clutching his still bleeding hand. The other members of the party stared at each other in quiet shock. Soon each one got up and left with out a word. leaving the massive pile of food and drink on the table.

It was a week later that the first death occurred. Peter, who’d of course played Peter at the supper was found face down in the river near his home. Peter had been the strongest swimmer of the group and what’s more, his row boat wasn’t even overturned.

As the weeks passed, one by one all those at the party turned up death in odd circumstances. Lecter himself could feel the evil all around him so he joined a ship bound for sea and was never seen live again by anyone on land.

What had happened to Lecter wasn’t known until the following Christmas season when the cook from Lecter’s ship came into a bar to climb into a bottle and forget his troubles. It seemed that Lecter joined the crew and was a fairly decent deckhand. He was extremely quiet and even slept in the chain lockers instead of with the rest of the crew.

One night in late October, the ship was battling a nasty storm and the crew had gathered in the forecastle where young Lecter had retold the tale of that night in April. The once again the voice came from Lecter.

“Gentlemen, tonight it is exactly six months since that Good Friday”. The crew grew quiet and stared at Lecter. With a sigh, Lecter got up, and climbed the ladder to the deck. Moments later, the crew heard a terrible scream and a splash.

With that, no one ever saw Lecter Daniels again. At least not anyone living.