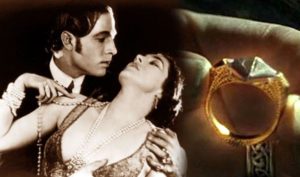 A silver ring set with a semi-precious stone lies in the vault of the bank of Los Angeles. It is not a particularly pretty ring or even a very valuable one, and chances are that no one will ever dare to wear it again.

The ring lies in the vault because it bears one of the most malignant curses in the history of the occult. Successive owners have suffered injury, misfortune, even death. And many people still believe it was this ring that sent Rudolph Valentino to a premature grave. Certainly, the violent incidents that have surrounded it over the years can hardly be shrugged off as mere coincidences.

Rudolph Valentino (May 6, 1895 – August 23, 1926) was an Italian actor, sex symbol, and early pop icon. Known as the “Latin Lover”, he was one of the most popular stars of the 1920s, and one of the most recognized stars from the silent film era. He is best known for his work in The Sheik and The Four Horsemen of the Apocalypse.

Valentino was born Rodolfo Alfonso Raffaello Piero Filiberto Guglielmi in Castellaneta, Italy, to a French mother, Marie Berthe Gabrielle Barbin (1856 – 1919), and Giovanni Antonio Giuseppe Fidele Guglielmi, a veterinarian who died of malaria, then widespread in Southern Italy, when Valentino was 11. He had an older brother, Alberto (1892-1981), a younger sister, Maria, and an older sister Beatrice who died in infancy.

As a child, Valentino was reportedly spoiled and troublesome. His mother coddled him while his father disapproved of his behavior. He did poorly in school, and was eventually enrolled in agricultural school where he received a degree.

After living in Paris in 1912, he soon returned to Italy. Unable to secure employment, he departed for the United States in 1913. He was processed at Ellis Island at age 18 on December 23, 1913.

In 1917, Valentino joined an operetta company that traveled to Utah where it disbanded. He then joined an Al Jolson production of Robinson Crusoe Jr., travelling to Los Angeles. By fall, he was in San Francisco with a bit part in a theatrical production of Nobody Home. While in town, Valentino met actor Norman Kerry, who convinced him to try a career in cinema, still in the silent film era.

By 1919, he had carved out a career in bit parts. It was a bit part as a “cabaret parasite” in the drama The Eyes of Youth that caught the attention of screenwriter June Mathis, who thought he would be perfect for her next movie.

It was in 1920 that Valentino, at the peak of his success, saw the ring in a San Francisco jeweler’s. The proprietor warned him that the ring was a jinx, but Valentino still bought it. He wore the ring in his next picture, The Young Rajah.

It was the biggest flop of his career and he was off the screen for the next two years. Valentino did not wear the ring again until he used it as a costume prop in The Son of the Sheik. Three weeks after finishing this film, he went to New York on vacation. While wearing the ring, he suffered an acute attack of appendicitis. Two weeks later, he was dead.

Shortly after Rudolph Valentino’s untimely death in August 1926, stories began to circulate that the great Latin lover’s ghost haunted his favorite places. Falcon Lair, the dream home he had built on Bella Drive for his bride Natacha Rambova, became the most commonly reported site for ectoplasmic manifestations of the departed Valentino.

Pola Negri, a famous female movie star of the time, asked to pick a memento from Valentino’s possessions, chose the ring-and almost immediately suffered a long period of ill health that threatened to end her career. A year later, while convalescing, she met a performer who was almost Valentino’s double, Russ Colombo.

Miss Negri was so struck by the resemblance that she gave him Rudolph’s ring, saying, “From one Valentino to another.” Within a few days of receiving the gift, Russ Colombo was killed in a freak shooting accident. His cousin passed the ring on to Russ’s best friend, Joe Casino.

Also at the height of his popularity as an entertainer, Casino took no chances with the ring. Instead of wearing it, he kept it in a glass case in memory of his dead friend. When he was asked to donate it to a museum of Valentino relics, he refused, saying that he treasured it for sentimental reasons.

As time passed, Joe Casino forgot the ring’s evil reputation and put it on. A week later, still wearing the ring, he was knocked down by a truck and killed.

By now the curse was front-page news. When asked what he proposed to do with the ring, Joe’s brother, Del, explained that he could not allow himself to be intimidated by a curse, or jinx, or ghost, or whatever it was. He didn’t believe in things like that.

Del Casino wore the ring for some time and nothing unusual happened. Then he lent it to a collector of Valentino relics, who suffered no ill effects either. This caused several newspapers to speculate that at last the evil influence of the ring had come to an end. And that seemed to trigger off a new wave of violence.

One night soon afterward, the home of Del Casino was burgled. The police saw the burglar, a man named James Willis, running from the scene. One of them fired a warning shot, but the bullet went low and killed Willis.

Among the loot found in his possession was the Valentino ring. It was at this time that Hollywood producer Edward Small decided to make a film based on Valentino’s career.

Jack Dunn, a former skating partner to ice star Sonja Henie, bore a great resemblance to Rudolph and was asked to make a film test for the part. He dressed in Valentino’s clothes for the test – and also wore the jinxed ring.

Only twenty-one years old at the time, Dunn died ten days later from a rare blood disease. After this tragedy the ring was kept out of sight and never worn by anyone again, but that did not seem to curb its fatal influence.

A year after Jack Dunn’s death, a daring raid was carried out in broad daylight on a Los Angeles bank in which thieves got away with a haul of over $200,000. In a subsequent police ambush, two of the gang were caught and three passersby seriously injured.

The leader of the bank robbers, Alfred Hahn, was jailed for life. At his trial, Hahn remarked: “If I’d known what was in the vault apart from money, I’d have picked myself another bank.” For in the bank’s safe deposit vault was the Valentino ring.