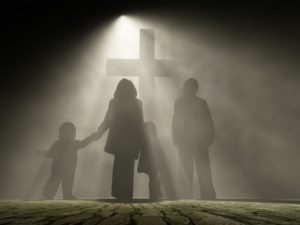 On the 30th of September, 1907, William Thomas Thurling Steenson died in Lismore, Northern NSW, Australia, after trying to stop a runaway train carriage in the line of duty at nearby Mullumbimby.

Seventy years later his gravestone provoked worldwide interest after it was found to be inexplicably glowing. This is the true story of Lismore’s Glowing Cross.

In early 1978 a strange happening occurred in the small Australian city of Lismore, as reports started to circulate about a mysterious ‘glowing’ or ‘fiery’ cross on the outskirts of town.

The North Lismore cemetery had long since ceased to take new burials, with the majority of those at rest coming from the town’s pioneer cedar-getting and farming days, but the headstone in question belonged to the grave of Steenson, a railway worker killed in a “shunting accident” at Mullumbimby in 1907.

For months the local press ran front page stories, and people gathered in their ‘hundreds’ at night to witness with their own eyes the strange phenomenon.

From near and far they came as the press whipped up a storm of controversy, with faith healers, physicists, religious ‘pilgrims’ and the just plain curious pouring into town.

It emerged that some locals had been aware of the existence of the glowing cross for over 60 years, and the Steenson family themselves expressed their displeasure at the publicity and vandalism it attracted to the resting place they believed should be left in peace.

Debate raged in the community about what made the granite cross glow. While some claimed it was reflected light, others thought it was the properties of the stone itself, or even the supernatural at work.

However no consensus emerged, and the cross eventually returned to the weed-covered obscurity it had come from before being ‘rediscovered’ in the mid-1980’s.

These days the whole affair is actually a mystery within a mystery as in 1986, at the height of a period of renewed media interest, the Glowing Cross disappeared.

For the past 20 years ex-Lismore men Steven Fawcett and Jeremy Fenton, who both admit to being “transfixed by the cross” during their childhood, have run an unsuccessful national campaign to locate it.

It has not been heard from since.