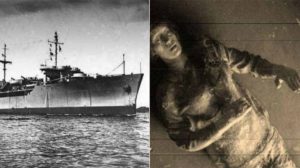 All ghost ship stories are creepy, some more than others and the story of the Ourang Medan has them all beat. A ship filled with dead crewmen, faces frozen in abject terror and then a mysterious explosion that destroys the ship and carries all answers to the mystery down to a watery grave…

In June of 1947, ships traveling in the Straits of Malacca near Indonesia picked up a chilling Morse Code distress call from a vessel identifying itself as the Ourang Medan. The message reads: SOS Ourang Medan…we float…all officers including captain are dead, in chart room and bridge…fear entire crew dead…

This was followed by a confusing series of dots and dashes and then the chilling message: “I die…”, then nothing. A ship named the Silver Star managed to triangulate the Medan’s position and raced to the rescue.

She found the distressed ship floating eerily silent. Nothing and nobody was moving on deck. A strange foreboding seemed to hang over the ship like a cloud. The captain of the Silver Star ordered a boarding party sent over.

When the crew from the Silver Star climbed aboard the Medan, what they found was horrifying. The ship’s entire crew was dead. And not merely dead, their faces were contorted in hideous expressions of fear and terror, their arms extended outward as if to defend themselves from some terrible attacker.

The Medan’s officers and captain were indeed dead on the bridge and chart room. The engineering crew were found at their stations, their faces warped in the same terrified expressions as the rest of their crew. Most chilling of all was the radio operator, dead at his post, hand still on the Morse key.

The Silver Star crew could find no evidence the ship had been attacked by pirates or terrorists, there was no sign of violence or even any defensive wounds on any of the dead crew.

Whatever had struck had left no evidence behind. In addition, the air aboard the Medan was unusually cold, despite the temperature that day being a sweltering one hundred and ten degrees Fahrenheit.

Thoroughly creeped out by these events, the Silver Star crew returned to their own ship. The captain decided to take the Medan in tow but a fire broke out on board the ghost ship and suddenly the entire vessel exploded and sank, taking her secrets with her to the bottom.

So what happened? Several theories point to the possibility of the ship carrying some kind of nerve gas illegally that was poorly secured and the gas leaked out killing the entire crew.

This would explain the lack of violence and defensive wounds on the dead crew. Could this deadly gas have caused the crew’s horrified expressions? Perhaps causing hallucinations or causing their muscles to freeze in hideous ways?

Other theories include sea monsters or aliens or even ghosts aboard the ship attacking their living shipmates. Until the wreck of the Ourang Medan can be found and thoroughly explored, these questions will remain unanswered.

But then again, some mysteries are best left unsolved…