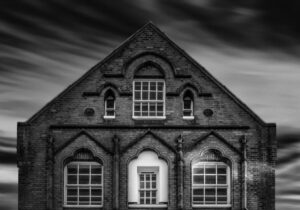 A century ago there stood in the heart of Wilkes-Barre, across the street from St. Mary’s Church of the Immaculate Conception, a house that many people considered cursed. The two-story brick house that once stood at 137 South Washington had a most peculiar history, and it was a history marked with tragedy, death and mystery.

The date of the home’s construction is unknown, as if the identity of its builder, but it is known that the first settlers in the area were German and Irish Catholics, who, in September of 1870, laid the foundation for the church that still stands across the street.

The house at 137 South Washington Street was home to the McFall family around the turn of the last century. The McFalls had moved from Easton to Wilkes-Barre in the 1870s, around the time St. Mary’s parish was established.

It was the morning of December 24 in 1902 when 35-year-old Elmer Ellsworth McFall died in the house, after being ill for two weeks with tuberculosis. As was the custom in most Irish households, the McFalls held the wake and the funeral in their home, and his body was laid to rest at Wilkes-Barre City Cemetery on Christmas Day.

Six months later, on June 5, 1903, Elmer’s father, William S. McFall, passed away quietly at the home from dropsy. Once again the house on South Washington Street was the scene of the funeral. He was then laid to rest at Hollenback Cemetery.

The health of Mary McFall, Elmer’s mother and William’s wife, began to fail soon after the funeral and she was taken to the City Hospital, where she died two days after her arrival. “Exhaustion due to self restraint from food and drink,” read the entry on the 61-year-old woman’s burial permit.

For the third time in six months, the house on South Washington Street became a funeral parlor, and after Reverend McKelly finished conducting the service, Mary’s body was interred at Hollenback Cemetery alongside the remains of her husband.

Mary’s other surviving children, a son named Firman and a daughter named Nettie, remained in the house, along with Firman’s wife and their infant daughter, Marguerite. by this time, however, Firman had come to believe that the house was cursed, and made up his mind to leave the first chance he could.

Unfortunately, the Grim Reaper paid yet another visit to the McFall residence before Firman and his family could escape. On May 8, 1904, four-year-old Marguerite McFall succumbed from meningitis.

The funeral service, conducted at 137 S. Washington St., was performed by Rev. Thomas Roberts of the Central Methodist Church, and several playmates of the young girl acted as pallbearers and flower bearers as her tiny body was conveyed to its final resting place. The Wilkes-Barre Record lists these children as Thomas and Dorothea Burke, Donald Campbell, James Cannon, Leo Whalen, Jennie Slammon and Maureen Ring.

Mr. and Mrs. Fermin McFall moved out of the house soon afterward, and Nettie, who was young and unmarried, went to stay with relatives in Scranton. Sadly, the McFall family “curse” seemed to follow her.

A few years after she married Michael Toomey and the couple had settled on Madison Street in Wilkes-Barre with their four children, Nettie contracted tuberculosis and was sent to the White Haven Sanitarium, where she died at the age of 36 in March of 1917. She was buried at Oak Lawn Cemetery.

After the McFalls moved away, the house was occupied by a series of tenants, none of whom managed to stick around too long. One tenant was John Daley, who drove a wagon for Thomas Murphy’s bakery and was the first to occupy the home after it was abandined by the McFalls.

On the afternoon of March 31, 1904, Daley was crossing the tracks at Miner’s Mills when his bakery wagon was struck by the D & H (Delaware & Hudson) Flyer, which was speeding around a sharp curve.

Although the wagon was smashed to splinters and Daley was hurled several feet into the air, he managed to survive his brush with death with only minor injuries. He later found work as a miner, and was killed the following year in a collapse of the Delaware and Hudson mine.

In the years that followed, the property was used for a variety of purposes. In 1905 it was rented by a dentist, Dr. O’Donnell. He soon left, and the space was taken over the following year by a furrier named J.H. Medrick. Medrick’s business also failed, and 137 South Washington Street was taken over by another furrier named Goldberg. He was out out of business by 1908.

Not long afterward the building again became a private residence, now occupied by Louis and Emma Corwin, who had moved to Wilkes-Barre from Buffalo. Shortly after moving into the house, a valuable dog owned by the Corwins was struck and killed on South Washington Street by a speeding motorist.

In November of 1920, Emma Corwin’s sister, Hattie Hunt, died in Philadelphia. Since her surviving family lived in Luzerne County, Hattie’s funeral was held inside the house. Louis Corwin, who incidentally worked as an undertaker for the W.E. Doron undertaking parlor, came down with a mysterious illness in 1923 and died suddenly at City Hospital at the age of 58. His was the sixth funeral to take place inside the McFall house– but it wouldn’t be the last.

After Emma Corwin moved to a different part of the city a few years later, the house at 137 South Washington Street was occupied by a woman named Mary A. Kearney. She died nearly as soon as she had arrived.

In 1927, Mary became the last person to die inside the house and hers was the seventh funeral to be held at that address in a span of 24 years. The building soon fell into disrepair, and was replaced by the three-story building which currently occupies the space across the street from the church.

So what was it about this one particular building that caused so many who lived there to die and so many who conducted business there to fail?

With its close proximity to an old church, the possibility always exists that a forgotten burial site might have occupied the same plot of ground. Lost graves were frequently dug up by workmen in the heyday of Wilkes-Barre’s growth.

In 1907, for instance, just one block from St. Mary’s Church, workmen digging on East Market Street uncovered a forgotten graveyard while excavating a foundation for the Hurlitz building.

The event, which aroused little excitement, only warranted a brief paragraph in the Wilkes-Barre Record, with a sentence hinting that this sort of thing seemed to happen on a daily basis: The discovery caused no surprise, as on former occasions human bones were found in this vicinity by workmen.

In 1906, a similar discovery was made near the McFall house, and the Wilkes-Barre News of April 21 of that year described how “an old graveyard included the site where the city hall stands, lying between South Pennsylvania Avenue and Washington Street, and extending as far north as the Allis Chalmers and Washington Street auto plant.”

The article explained that many of the corpses were removed to the city cemetery, but hundreds were left behind.

While digging the foundation for St. Stephen’s Church on Franklin Street in 1897, just a few blocks north of the McFall house, workers uncovered a slew of graves dating back to the Civil War era.

On August 19, 1890, at 5:20 in the afternoon, a tornado ripped through Wilkes-Barre and wiped out a significant portion of South Washington Street. St. Mary’s Church was not spared from the wrath of the cyclone; the church’s roof was blown off and the bell tower destroyed.

The twister of 1890 killed 14 people and destroyed nearly 400 homes and buildings. It took years to rebuild, and lost in the confusion and the tons of debris were any clues about what once stood on the site prior to the tornado, forever leaving the origins of the McFall “hoodoo house” a mystery.