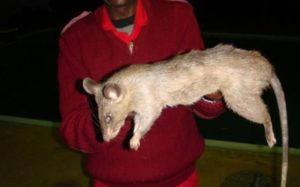 Jenny Nixon was a native Bostonian and had spent her entire working life doing various jobs at the Boston Harbor docks.

It wasn’t unusual at all for Jenny and her co-workers to see stray animals at the docks, many simply passing thru while others decided to stay. Such was the case with what Jenny thought was the cutest little dog she had ever seen.

In 1995 Jenny and her co-workers fed the little white dog every day, in fact he seemed to be very healthy, gaining weight and getting bigger. No one was sure what kind of dog it was but Jenny sure did like him.

With Winter coming soon she was concerned about how the little dog would handle the brutal North Eastern Weather. After giving it considerable thought she decided she would take the little dog home.

Jenny got the dog home and gave him a bath, which he seemed to enjoy, and weighed him, 20 lbs, he’s doing great she thought. The dog stayed with her every moment and she thought she had made a great decision.

As it got later in the day it was time to make dinner, she had a taste for hamburgers and she fired up the grill. She wasn’t ready to let the dog outside just yet but there he was sitting at the screen door watching her every move.

Then as she was finishing her meal she glanced at the screen door, the dog was no longer there. She got an odd and disturbing feeling and went into the house.

To her right, she saw a wet brownish spot on the carpet and a trail leading around the corner. Peeking into the hallway she saw a horrendous sight. Horrified, she was confronted with the gruesome sight of a large spot of blood on the floor and all that remained was her cat’s skull sitting nearby.

Not knowing what to do she went back outside and waited until the dog showed up at the screen door. Jenny slipped past the dog and cleaned up what was left of the cat just as the dog returned to the scene of the crime.

Thinking that the dog must have eaten bones, she got the dog in the car and headed to the veterinarian. As soon as they arrived a vet tech took the dog into an exam room but returned just seconds later with the doctor and a look of disbelief on her face.

What Jenny had brought home turned out not to be a dog at all. It was a 20 lb, white Cambodian rat. The rat was so big that it looked like a small dog with a little snub tail. It must have hitched a ride on a ship in Asia that eventually ended up in Boston, where he met his new best friend Jenny.