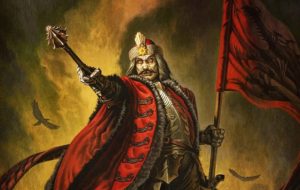 Do you know the true story of Dracula? Touched loosely upon in many current movies including and most recently Dracula Untold is the fact that Dracula was once a real person. A flesh and blood monster living amongst us.

First of all, forget about Bran Castle. Many will tell you that this was the home of Vlad Dracul, but the truth is he never set foot in it. Vlad was born in Sighişoara, Transylvania in 1431. The son of a Wallachian ruler, he was from birth destined to take a seat of power, but nobody could have imaged how powerful he would become.

The year of Vlad’s birth King Sigismund, the man who would become Holy Roman Emperor formed a powerful new brotherhood of knights known as the Order of the Dragon with the sole mission to destroy the Turks.

As a young man Vlad trained to join the order, but his indoctrination was interrupted when he was kidnapped and held captive by the Turkish Sultan Murad II. These five years of captivity twisted something in Vlad, and it was no longer the boy they released, but a monster.

He rejoined the Order of the Dragon, eventually taking control of the order and using the brotherhood as a weapon to suit his own needs. He and his order lashed out at not only the Turks but the Ottomans as well playing a major role in the fall of Constantinople in 1453.

These were the wars in which the legend of The Impaler were born. Not only would Vlad impale enemy survivors of his battles, but he would also leave them living for days on end, each day coming to spend his dinners amidst their moaning and sobs as they slowly died impaled on ten foot pikes for as far as the eye could see.

We could go on and on about Vlad’s rise to power and his seat as Prince of all Romania, but I did say this was a story about a monster.

A small but grizzly story which serves to clearly define Vlad’s continued hatred for the Turks… Having become Prince of Romania the Turks had no choice but to attempt trade negotiations with Vlad. These did not go well.

Upon the arrival of the Turkish trade envoy Vlad’s guards took them by force to his palace where he personally nailed their turbans to their heads.

At the peak of his power Vlad called upon the nobles from across all of Romania and Wallachia to ask them a single question; “How many Princes have you survived?” The only nobles to leave the meeting alive were the youngest as all the rest had survived even one Prince. Vlad’s point? It is treason to live while your Prince dies, is overthrown, or otherwise loses power.

Those that answered incorrectly were as was Vlad’s custom thrown from the castle walls onto the rows of pikes below.

The story is told that Vlad took a mistress during his years in Tirgoviste. Unfortunately for her he was not a man to be lied to and she was a woman with lofty aspirations. Presumably in an attempt to solidify her connection to the Prince the mistress lied and informed him that she was pregnant with his child.

Upon discovery of the lie Vlad dragged her into the street where he cut her open from groin to breast with all those around watching. He then proclaimed his desire for all to see where he had been. He left her to die in the streets.

On St. Bartholomew’s Day, 1459 Vlad traveled to the region of Brasov to investigate claims of corruption amongst the officials and throughout the community of merchants. His trip proved successful and with his discovery of the corruption he impaled 30,000 people from the region including officials and peasants alike.

With the fields lined in impaled bodies alive and dead he sat down for dinner to admire his work.

The next year he commanded that all Turkish prisoners of war, an estimated ten thousand of them be brought to his castle. Tales of this account describe what happened next as an effort in decorating rather than formal executions.

All ten thousand prisoners were impaled on the pikes surrounding Vlad’s castle bringing the total number to what is told as twenty thousand.

We said above that there is no historical evidence of Vlad so much as setting foot in Bran Castle. The true home of Dracula was Poenari Castle in Arefu Romania. This, of course, was not Vlad’s only fortress or palace, but it is the location which history tells us he spent his years as Prince in, and the site of many of his atrocities.

It was also in Poenari Castle that the story of Vlad ends and the legendary vampire Dracula begins. The story tells that Vlad’s first wife committed suicide by leaping from the castle walls rather than be taken prisoner by the approaching Turks.

Her body landed in the Argeş River below turning the water red with blood. When Vlad learned of the suicide he bathed himself in the blood-soaked waters of the Argeş before setting out for revenge. At this moment the man became a demon which would be a legend for centuries to come.

Whether or not there is any truth to the legends of Dracula the blood sucking demon, there is no doubt that Poenari is haunted by something of true power unlike any other haunting. There are countless witnesses who have reported the lights of an army in the surrounding hillsides night after night with no physical trace found in the daytime. In the castle itself many speak of an orb of light moving erratically through the halls and that when it draws near one feels an intense feeling of sorrow.

It is worth mentioning that despite the evolution of Vlad’s story into that of a demonic creature, Vlad is in fact thought of amongst the locals as one of the greatest rulers of the region and regarded as a hero. You can think what you like of the man and the monstrous stories above, but there is one more story…

It’s said that in the center of Tirgoviste sat a single golden chalice of exceptional beauty and value. There were no encasements or guards to protect the chalice, only the knowledge that this town and all in it were property of Vlad Dracul.

The golden chalice remained untouched from the time it was placed to the time of Vlad’s death, and some say even after. There is after all some benefit in having a legendary monster for a ruler.