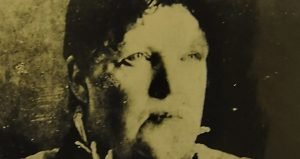 In 1890 Mrs. Elizabeth Potts became the first woman to be hanged in Nevada. In fact she was the only woman to be executed by the state. And it was a ghost that sent her to the gallows…

It all started when a newspaperwoman from Elko moved into the Potts’ former home. The columnist was pleased with the comfy cottage and continually bragged to her readers about the streak of luck that had led her into finding the home.

Carlin was a friendly town and her neighbors couldn’t have been more kind. But as things so often do, little by little the newspaperwoman’s joy turned to fear.

One night an unearthly howl wakened the writer and her husband from a sound sleep. The man got up and looked all around the house and yard for the source of the noise but could find no cause.

By the light of day the incident seemed more comical than cause for alarm. So the writer cheerfully told her readers about the mysterious noise. What fun, she wrote, living in a haunted home.

Weeks went by and all was fine. Then the noises began again. But this time the sounds were more like deep pitiful moans that rumbled through the house setting the couple’s nerves on edge.

Once more the husband searched in vain for the cause of the noise. This time the writer did not tell her readers about the sounds she thought were of unearthly origin.

Soon the noises could be heard at all hours, day and night. Frantic to find the source of the noise the couple began searching in cabinets, bookcases and even the garden. Still the moans continued.

Finally, the exasperated wife asked her husband if he’d made a thorough search of the cottage’s basement. When he admitted that he hadn’t she insisted he look, even though she knew there was nothing down there but a few broken pieces of furniture and some garden tools.

As the man slowly descended the stairs the pitiful moans became deafening. Bravely, he continued to the basement where he looked through the stack of tools and pile of broken furniture.

He called up to his wife that there was nothing remiss, turned to climb the stairs, and tripped over something protruding from the dirt floor. It didn’t take much digging for him to realize that it was a bone sticking in the damp earth.

Horrified, the couple notified the town’s lawman of their gruesome discovery, and he quickly determined that the bones were indeed human.

The little cottage became blissfully quiet once the lawman and his assistants had removed the hacked and charred skeleton from the basement.

From papers found near the skeletal remains it was determined that the dead man’s identity was Miles Faucett, a salesman who had once roomed with the home’s previous tenants, Josiah and Elizabeth Potts.

The Potts were brought in to explain how Miles Faucett’s hacked skeleton came to be in their basement. While Elizabeth Potts maintained a stony composure, Josiah broke down weeping and confessed to burning the body and hacking it up.

Both the Potts stood trial for the brutal murder of Miles Faucett, even though their five-year-old daughter told everyone that her mother had killed Mr. Faucett while her father was away on business. 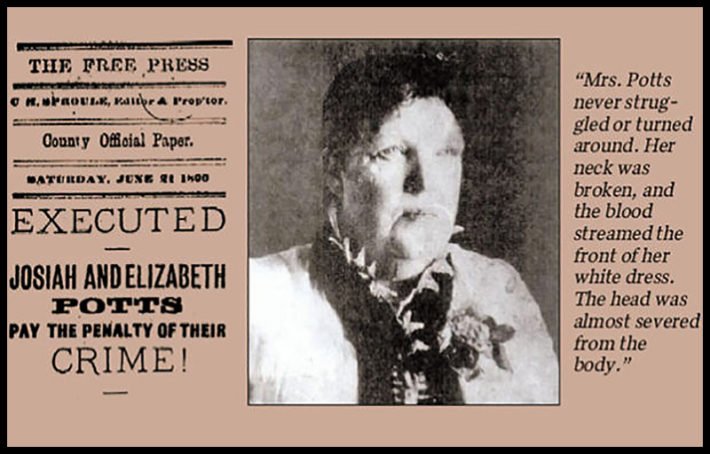 The couple appealed their death sentence to the Supreme Court to no avail. Members of the community rallied around Mr. Potts and the presiding judge asked the Board of Pardons for a commutation of his sentence.

It was generally conceded that Mrs. Potts was the head of the household with Mr. Potts doing her bidding, even so far as to attempting to dispose of Mr. Faucett’s body for her.

Regardless, Josiah and Elizabeth Potts were hanged in Elko Nevada. And the strange noises were never heard again in the little house. Perhaps the spirit of Miles Faucett is at last resting in peace.