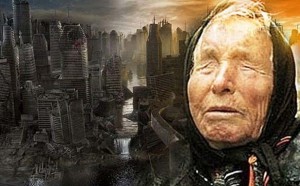 Baba Vanga was a Bulgarian alleged clairvoyant. She convinced many followers that she possessed paranormal abilities.

Prophecy made in 1980: At the turn of the century, in August of 1999 or 2000, Kursk will be covered with water, and the whole world will be weeping over it. Kursk was the Russian nuclear submarine K-141, it sank in the barents sea on August 12th 2000, the Nato name was Oscar II.

Prophecy made in 1989 : “Horror, horror”! The American brethren will fall after being attacked by the steel birds. The wolves will be howling in a bush, and innocent blood will be gushing. On 9/11 or September 11, 2001 planes hit the World Trade Center.

Prophecies for the near future

2016 – As a result of the fallout of nuclear fallout in the northern hemisphere will not be any animals or vegetation. Then Muslims will wage war against chemical surviving Europeans.

2016 to 2019 – Most people will suffer skin cancer and other skin diseases (a consequence of chemical warfare). Europe almost lonely (empty).

2019 to 2024 – China becomes a world power. Developing countries in turn operated from exploiters. A little bit of change in the Earth’s orbit.

2033 to 2045 – The polar ice are melting. Greater levels of the oceans, the world economy is thriving. In Europe, Muslims rule.

2046 to 2070 – Any bodies (organs) can be manufactured (cloning?). Replacing the bodies is becoming one of the best methods of treatment. During the attack on the Muslim Rome, the United States used a new kind of weapon the climate. The sharp cooling (instant freezing).

2088 to 2167 – A new disease, aging for a few seconds! The rapid aging defeated, Artificial sun illuminates the dark side of the Earth, People become living robots, The war between small nations. Big nations do not intervene, Hungary will receive signals from space, Colony under water (with the help of sympathetic councils). Animals turn half-human, A new religion.

2170 to 2256 – Major drought, A colony on Mars becomes a nuclear power, and demands independence from the Earth, Will stop 2 large eruption of volcanoes, Sea Colony fully developed, abundant energy and food, Complete mixing of Asians and Europeans, At the Sun slowing thermonuclear processes. Temperature drops. In the search for extraterrestrial life, humanity comes into contact with what is something terrible, Spacecraft forgotten to Earth terrible new disease.

2262 to 2304 – Planets gradually changing planetary orbit. Mars is threatened by comets, Restart physical constants are changed, Mixing yellow, white and black races. New race. Power from nothing (probably from a vacuum or a black hole). Travel back in time (Time Travel invented?). New contacts with aliens. The sun cools. Attempts were being made to light it again. Powerful eruption on the Sun. Changing the force of gravity. Beginning to fall old space stations and satellites, In France, guerrilla movement against Islam. New important laws and secrets of the universe revealed. Secrets of the Moon revealed.

2341 to 3805 – Something terrible is approaching Earth from space. An accident in one of the artificial Sun leads to drought. The great famine. A new fast-growing race, 2 artificial Suns collide. Land in the twilight, The war on Mars. Violated the trajectory of the planet. Comet hits Moon. Around the Earth – ring/zone of the stones and dust. By this time on Earth killed all life, but mankind will be able to lay the foundations for a new life in another stellar system. A new planet is populated by little. Fewer contacts between people. Climate new planet affects the organisms of people – they mutate. The war between humans for resources. More than half of people dying out.

3815 to 3878 – The development of civilization virtually stops. People live flocks as beasts. New prophet tells people about moral values, religion. New prophet receives support from all segments of the population. Organized a new church. Along with the Church to re-train new people forgotten sciences.

4302 to 4674 – New cities are growing in the world. New Church encourages the development of new technology and science. The development of science. Scientists discovered in the overall impact of all diseases in organism behavior. Found a way to win any disease, Due to mutation people at last beginning to use their brains more than 34%. Completely lost the notion of evil and hatred. Getting to Know God. The man has finally been reached such a level of development that can communicate with God. People achieve immortality. The development of civilization has reached its peak. The number of people living on different planets is about 340 billion. Assimilation begins with aliens.

5076 to 5078 – A boundary universe. With it, no one knows. The decision to leave the boundaries of the universe. While about 40 percent of the population is against it.