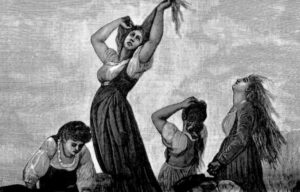 On June 2, 1630, Father Urbain Grandier, the parish priest of St.-Pierre-du-March of Loudun, France, was accused of witchcraft by a group of Ursuline nuns.

Grandier, a politically-influential priest with a worldly lifestyle, scandalous affairs, and romantic adventures, had made many enemies. In 1618, Grandier had written a sarcastic discourse about Cardinal Richelieu.

By 1630, Richelieu had become one of the most powerful men in France, and would play an important role in the Loudun case.

The nuns, while throwing convulsions and wild fits, said Grandier had sent demons to possess them. The role of exorcist was taken by Father Mignon, one of Grandier’s enemies. Rather than attempting to cure them, Mignon encouraged the nuns in their antics.

Their symptoms included fits, convulsions and speaking in tongues. Over a period of several years, exorcisms were performed, during which nuns barked, screamed blasphemies and acted out obscene contortions.

As hysteria around the episodes increased, public exorcisms were performed; they became something of a tourist attraction, drawing curious spectators to Loudon.

Grandier was convicted on all counts. The sentence was pronounced on August 18, 1634:

“We have ordered and do order the said Urbain Grandier duly tried and convicted of the crime of magic, maleficia, and of causing demonical possession of several Ursuline nuns of this town of Loudun, as well as of other secular women, together with other charges and crimes resulting therefrom.

“For atonement of which, we have condemned and do condemn the said Grandier to make amende honorable, his head bare, a rope round his neck, holding in his hand a burning taper weighing two pounds, before the principle door of the church of St. Pierre-du-March, and before that of St. Ursual of this town.

“There on his knees, to ask pardon of God, the King, and the law; this done, he is to be taken to the public square of St. Croix, and fastened to a stake on a scaffold, which shall be erected on the said place for this purpose, and there to be burned alive…and his ashes scattered to the wind.

“We have ordered and so do order that each and every article of his moveable property be acquired and confiscated by the King; the sum of 500 livres first being taken for buying a bronze plaque on which will be engraved the abstract of this present trial, to be set up in a prominent spot in the said church of the Ursulines, to remain there for all eternity.

“And before proceeding to the execution of the present sentence, we order the said Grandier to be submitted to the first and last degrees of torture, concerning his accomplices.”

Several “witches” were tortured, along with Grandier himself, who was burnt at the stake in August 1634.

According to some accounts, the accusations were part of a conspiracy: the nuns were asked to feign possession in order to discredit the handsome and “immoral” priest Grandier, who had become something of an embarrassment to the church.

Agénor de Gasparin suggests that the early so-called “demonic manifestations” were actually pranks played by some of the boarding students in an effort to frighten some of the nuns; and as the matters progressed, it was the chaplain Jean Mignon who introduced Grandier’s name to the suggestible nuns.

In any case, the Loudon Possessions aroused suspicions about the value of eyewitness testimony and the authenticity of intense spiritual visions.