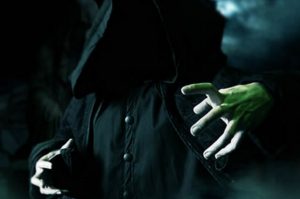 The Pontefract poltergeist haunted the house of Jean and Joe Pritchard and their two kids: Phillip, who had been 15, and a 12 years old Diane. However when it made its first appearance, in September 1966, most of the family was away on a trip. Only Phillip was there, together with his grandma Mrs. Scholes, Jean’s mother.

On the evening of September 1, Mrs. Scholes was sewing in the sitting room. Just as Phillip walked in, there was a gust of wind, the back door slammed, and the room instantly felt icey cold. Then Phillip noted a cloud of whitish dust, like chalk dust. It hadn’t come off the ceiling, as it was only in the lower half of the room. As he watched, it coated the furniture with a thin layer of powder.

Phillip and his granny fetched Aunt Marie, who lived across the road. Immediately after she walked in, she slipped on a pool of water. They mopped it up, but more appeared. No one – not even a man from the water company – could understand where it was coming from.

In the beginning, the Pritchards weren’t frightened, just confused. They only realized the house might be haunted when a wardrobe started to sway away from side to side and moved across the floor by itself. At that point, Phillip and his grandmother packed their bags and went to stay with Marie.

Later that night, Marie and ehr husband Vic decided to investigate. They had a friend, Mr. O’Donald, who was interested in ghosts, so theyr asked him to come and explore the “haunted house”.

When they opened the door, they felt a blast of cold air, but found nothing else unusual., Mr. O’DOnald said he thought the problem might be a poltergeist. He added that poltergeists often damaged photographs. Then, as it was quite late, he went home. The moment he had gone, Vic and Marie heard a crash. In the next room, they found the Pritchard’s wedding photo on the floor. The glass was cracked, and also the paper was slashed in two.

Afterwards, the haunting ended as quickly as it had begun. When the rest of the family returned from their trip, everything was back to normal, and nothing spooky happened in the Pritchard household for two whole years.

Then, someday, Jean Pritchard and Mrs. Scholes were having tea when they heard a noise in the hall. They found the covers from Jean’s bed lying at the foot of the stairs. Phillip’s bedclothes were thrown downstairs too, along with some potted plants. Mrs. Scholes was sure it was the ghost. “I told you,” she said, “it’s starting again!”

This time, nevertheless, the haunting was much worse than earlier. The entire house was filled with banging noises and thumps, and the rooms would suddenly become mysteriously cold. Dozens of objects began moving around by themselves.

One of the upstairs rooms in the house was being decorated, and several paintbrushes, a carpet sweeper and a roll of wallpaper were hurled through the air. The kitchen was affected too – giant bite marks appeared in a sandwich in the refrigerator.

Eventually, the Pritchards had had enough. They decided to call a priest to perform an exorcism – a type of religious ceremony which some people think can get rid of ghosts and demons.

When the priest arrived, he suggested that the bumping noises and moving furniture weren’t caused by a ghost at all, but by the house subsiding. However, he soon changed his mind when, just as he finished speaking, a candlestick floated into the air and waved itself under his nose. Terrified, he left in a hurry, saying there was evil in the house.

Diane Pritchard, who was now 14, seemed to be the focus of the haunting. This suggested a poltergeist was to blame, as they are known to victimize teenagers. Diane was thrown out of bed during the night, and even dragged up the stairs by a pair of invisible hands which grabbed hold of her cardigan.

However, another family member, Joe Pritchard’s nonsense sister Maude, didn’t believe a word of the stories she heard about a poltergeist at the Pritchards’ house. She was sure Diane and Phillip were playing tricks, hoaxing the haunting to get attention.

Convinced she would uncover a fraud, Maude decded to come and visit the Pritchards in Pontefract, in order to see the events for herself.

As soon as Aunt Maude arrived, the lights went out. Then the refrigerator door opened and a jug of milk floated out, crossed the room and poured itself onto Maude’s head! Still convinced it was a trick, she decided to stay the night. She and Jean arranged to sleep in the same room as Diane, to keep her company.

That night, the poltergeist put on its most impressive show so far. Food from the refrigerator was strewn all over the kitchen floor, all the lights in the house flickered on and off, and when Maude climbed into bed, her reading lamp detached itself from the wall and sailed out of the bedroom door. And four tiny lightbulbs, which were part of the gas fire in the living room materialized in Diane’s bedroom.

But the scariest part was yet to come.

Suddenly, an enormous pair of furry hands reached around the door, one at the top and one near the bottom. It looked as it there was a huge monster behind the door – until they realized that the hands were in fact Aunt Maude’s fur gloves, moving by themselves.

“Get away- you’re evil!” screamed Aunt Maude. in reply, one of the gloves beckoned the women to come neared – but they were too scared to move. Then Aunt Maude sand a hymn to scare the ghost away, but the gloves merely beat time to the tune. Jean Pritchard later admitted that although the moving gloves were frightening, the way the ghost teased Aunt Maude was funny too.

Until now, whatever had been haunting the Pritchards had been invisible. But soon after Maude’s visit, Jean and Joe woke up one night to see a hooded figure in the doorway. When they switched on the light, it vanished. Their friends also saw it – one of them said it looked like a monk. One visitor even felt it touch her head.

It turned out that there had once been a monastery near the house. Was a monk’s ghost on the loose?

Not long after that, the ghost made a last appearance. Diane and Phillip were watching TV when they suddenly saw the monk through the glass kitchen door. Phillip ran after it, and was just in time to see it disappear into the kitchen floor. That was the last they ever saw or heard of it.

Was the Pontefract poltergeist a hoax? The ghost hunters who investigated the case didn’t think so. One of them, Colin Wilson, said that there were so many witnesses and unexplained events that the case only convinced him that ghosts really do exist…

Ghosts and Legends of the Mississippi Gulf Coast