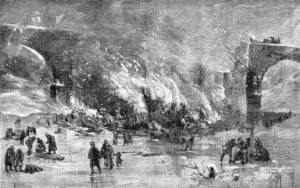 Nowadays we take the ability to travel long distances in a relatively short period of time for granted. The hour long flight from Columbus to Chicago, D.C. or New York is seen as a cramped and necessary evil without thought as to what a 3 day long trip by horse would do to your morale and wanderlust, let alone your inner thighs. This wasn’t always the case, however.

There once was a time when people treated travel as an occasion. Be it by train, plane or automobile, folks would don their fanciest duds before embarking on an excursion, no matter where their tiptoe through the tulips led them.

Travel by train could be a particularly festive and luxurious affair. It offered the opportunity to mingle with all different types of human beings via dining, smoking and lounge cars. People would speak to each other in those days, enjoying one another’s company over a game of cards, a cup of tea, or while smoking a cigar of fine tobacco.

I imagine that such was the case for the 197 (or 300 depending on the source) passengers aboard the Number 5 Pacific Express Train as it traveled from Albany, New York through northeastern Ohio bound for Cleveland and points beyond on December 29th, 1876.

Still, in the throws of holiday travel and merriment, the fine people aboard the Pacific Express were able to enjoy the full range of comforts that traveling by rail offered, buffered from the freezing winds and 20 inches of snow that blanketed northeastern Ohio by the train’s rich wood interiors, which were lit by the warm glow of oil lamps and heated by coal and wood burning stoves.

As the Choo Choo chugged along into Ashtabula, Ohio disaster stuck, plunging the jovial passengers into a hellish maelstrom of unimaginable death and agony.
Just a mile before reaching the depot the train was set to traverse a gorge over the frozen waters of Ashtabula Creek by a relatively new railway bridge. 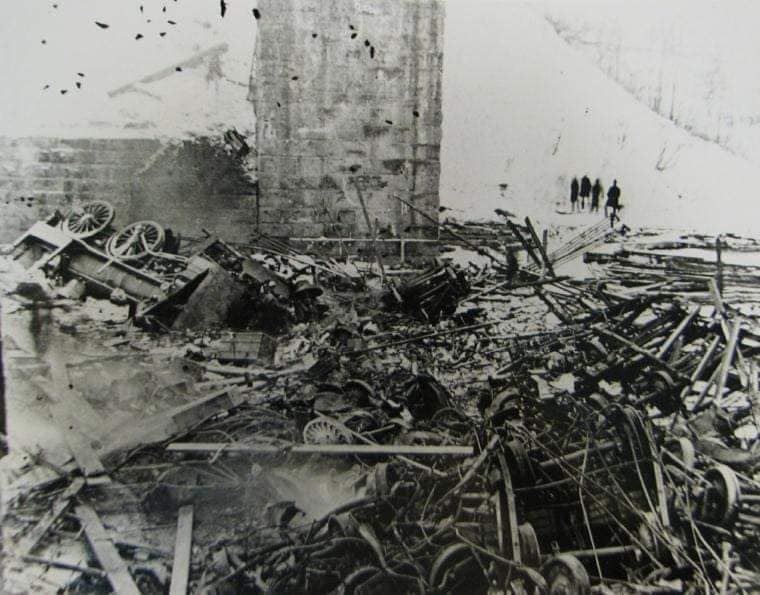 Only one locomotive of the Pacific Express made it across before the structure collapsed. Those that survived in the first passenger car to fall into the ravine had a few seconds to gather their wits before the second engine broke it’s coupling and plunged 80 feet to land on top of them, crushing everyone flatter than Christmas pizzelles. Then the other 9 passenger cars came falling into the ravine, piling end on end.

The scene at the bottom of the gorge that evening was beyond human imagination. Some were crushed to death, some were cut cleanly in half, some were trapped in submerged rail cars and some escaped the wreckage then fell through the ice and were drowned in the creek. Then the fire broke out…

Since there was no path into the gorge it was a messy process to get assistance down to the survivors but the fire department did manage to get an engine to the scene. Under the leadership of an alcoholic and simple minded fire chief, the priority became pulling survivors to safety rather than extinguishing the advancing inferno as it consumed the train.

The fire ended up taking more lives than the bridge collapse, itself. Witnesses described blackened lumps of ex-humans dotting the snow, helplessly watching as trapped passengers begged to have their limbs cut off to avoid being burned alive and even described seeing fire whitened skulls with brains oozing from their eye sockets amidst the wreckage!

One of the most chilling descriptions I’ve been able to find told of the overwhelming cacophony of screams that slowly transformed into groans until, finally, a solitary moan was silenced and only the sound of fire remained.

To add insult to injury theives descended upon the carnage and pillaged the survivors and dead with equal fervor.

By most counts upwards of 100 people perished in this tragedy, though some believe the casualties numbered 200 or more.

On January 19th, 1877 the town of Ashtabula laid to rest the charred corpses and body parts of an estimated 25 people in a mass grave at Chestnut Grove Cemetery. A large obelisk commemorates their lives.

A short time later they would be joined by Charles Collins, chief engineer for the railroad. Not long after giving a tearful and heartbroken testimony at the trial investigating the incident, Charles was found shot through the head in an apparent suicide and interred in a crypt next to the mass grave.

Many years later the coroner’s report (which was kept hidden by railroad executives) would reveal the determination of Collins death as murder rather than suicide. Don’t mess with big business.

Another indirect casualty of the disaster was Amasa Stone, president of the Cleveland, Painesville & Ashtabula Railway. He designed the bridge and hired two separate engineers to flesh out his idea.

When both told him the design was unsafe he successively fired them and personally oversaw the structure’s construction, himself. He also choose to ignore federal law and had the train outfitted with non-extinguishing railcar stoves, which resulted in the hellish fire that followed the bridge collapse.

Even though there was blood all over his hands, Amasa Stone refused to accept responsibility for the tragedy. He was found at fault in several investigations that followed, but the only consequence was that his company pay out $500,000 to the survivors and families of the deceased.

Public opinion of Amasa Stone as an unrepentant murderer affected his business reputation and, eventually, his bottom line. Seven years after the disaster he realized that his wealth was evaporating, so he locked himself in the bathroom and shot himself through the heart. Good riddance.

Local legend says that the screams of the dead can be heard drifting through the gorge and that phantom lights drift through the air there on the anniversary of the accident, but the victims of the Pacific Express disaster seem most rooted to their final resting place.

Throughout the years caretakers, visitors and passersby at Chestnut Grove Cemetery have reported sightings of spectral figures wandering the grounds with luggage in tow. One of the more sad apparitions is an elderly man in a top hat, who is looking for his grandson.

Another sad ghost is Charles Collins, who has been spotted standing by his crypt sobbing and wringing his hands in anguish over the part he played in the death of so many innocent people. Perhaps the most unnerving phenomenon connected to the cemetery is the unearthly screaming heard from time to time and the scent of burning flesh that fills the air.

So as you prepare your travel plans this holiday season, throw on something nice and make the most of your trip by engaging those around you. Arriving at your destination is never guaranteed.