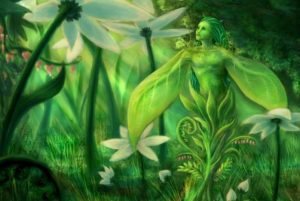 In the late 60’s, scientists began studying the ability of plants to see if they experienced emotions.

This was a complementary study to the discovery of the Kirlian Effect in photography that displayed the auras that exist around plants. Since the 60’s additional experiments have been done that include attaching the electrodes from a standard lie detector.

The results of this last study has created a theory that plants are psychic.

The readings from the electrodes repetitively showed that plants react before any action was taken. When the intent was to simply be near the plant, the readings were calm.

When the intent was to trim or cut, the readings became erratic. It appeared that the plants were demonstrating psychic abilities.

An additional result occurred in this study that was originally unintentional. When a researcher accidentally cut his finger, there was an immediate reaction from the plant.

Other studies have shown that when a tree is cut down, it sends out a warning to all of the other trees that there is danger. This warning created a situation where the other trees began to increase sap levels to strengthen themselves.

Fringe scientists have a theory that there is a bond between humans and plants that exist all the way to the molecular level.