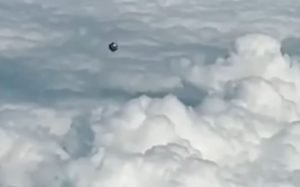 The “Viva Air” pilot during a commercial flight over Medellin, Colombia, noticed a strange object flying to the plane, and decided to record it.

In the video, we see that the cube-like UFO passes the plane at a safe distance.

Unlike any known aircraft, these objects have been sighted overcoming the earth’s gravity with no visible means of propulsion. They also lack any flight surfaces, such as wings.

If an aircraft travels faster than the speed of sound, it typically leaves “signatures,” like vapor trails and sonic booms. This type of UFO accounts note the lack of such evidence.

What are these mysterious objects flying with hypersonic speed and the ability to fly without obvious wings, tail or exhaust? No one has yet gotten close to crafts that display these traits, so their origins are still unknown.