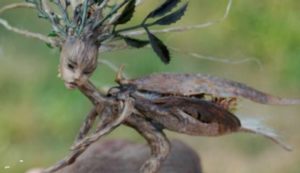 Most of us think of fairies as tiny creatures, flitting about on gossamer wings, waving a magic wand, but history and folklore tell a different tale.

When belief in fairies was common most people didn’t like to mention them by name and so referred to them by other names such as the Little People or the Hidden People.

There are literally hundreds of different kinds of fairy folk, such as Sprites, Gnomes, Goblins, Banshees etc, some are minute creatures, others grotesque – some can fly, and all can appear and disappear at will.

Fairies are generally described as human in appearance and having magical powers. Diminutive fairies of various kinds have been reported through centuries, ranging from quite tiny to the size of a human child. These small sizes could be magically assumed, rather than constant. Some smaller fairies could expand their figures to imitate humans. On Orkney, fairies were described as short in stature, dressed in dark gray, sometimes even seen in armor.

In some folklore, fairies have green eyes. Some depictions of fairies show them with footwear, others as barefoot. Wings, while common in Victorian times and later artworks, are rare in folklore, fairies flew by means of magic, sometimes perched on ragwort stems or the backs of birds, whilst nowadays they are often perceived to be having dragonfly or butterfly wings.

The oldest fairies on record in England were first described by the historian Gervase of Tilbury in the 13th century.

Gobgoblins are guardian fairies, they are useful ones and do housework and odd jobs around the house. In Aberdeenshire, Scotland they are hideous to look at, they have no separate toes or fingers and in the Scottish Lowlands they have a hole instead of a nose!

Banshees are less common and more sinister, they usually only appear to foretell a tragedy. In Highland tradition the Washer-by-the-Ford, a web footed, one nostrelled , buck toothed hag is only seen washing blood-stained clothes when men are about to meet a violent death!

Brownies are said to inhabit houses and aid in tasks around the house, like getting rid of spiders. However, they do not like to be seen and will only work at night, traditionally in exchange for small gifts of food. Among food, they especially enjoy porridge, honey, butter, and cream. They usually abandon the house if their gifts are called payments, or if the owners of the house misuse them. Brownies make their homes in an unused part of the house, often in attics and holes in walls.

Goblins and Bug-a-boos are always considered to be malignant with the advice of to avoid them if at all possible!

A considerable amount of lore about fairies revolves around changelings, fairy children left in the place of stolen human babies. In particular, folklore describes how to prevent the fairies from stealing babies and substituting changelings, and abducting older people as well.

A will-o’-the-wisp, will appear as an atmospheric ghost light seen by travelers at night, especially over bogs, swamps or marshes. It resembles a flickering lamp and is said to recede if approached, drawing travelers away from the safe paths and into danger.

Belief in fairies has not completely died out. As recently as 1962 a Somerset farmer’s wife told how she had lost her way on the Berkshire Downs and was put on the right track by a small man in green who appeared suddenly at her elbow and then disappeared.