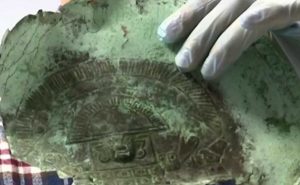 Recently, the sensational news spread around the world that mysterious artifacts were discovered off the coast of Florida.

Their antiquity was obvious, but their origin was unknown. In total, seven items fell into the hands of scientists. All of them are created from a material that is practically not found on Earth – iridium.

Of course, this item was created by the hands of people and in quite earthly conditions. The fact is that iridium is found in large quantities in fallen meteorites. Apparently, the ancient people noticed the “sign” from heaven and went after it. Having obtained the most precious stone, they began to create cult objects.

Analysis of the artifacts showed that they are at least 12 thousand years old. Considering that iridium is a very refractory and hard material, it is probably worth reconsidering the level of development of metallurgy among the ancient Incas.

Presumably, these items belong to them. Personally, I have no doubt that the ancient civilizations possessed transcendental knowledge in those areas that have not yet been conquered by modern humanity. Therefore, there is no doubt that the masters were able to create these masterpieces 12 thousand years ago.

Of greatest interest was the mask of the god Viracocha. Its thickness is only 1.7 mm. At the same time, there is a drawing of a great deity and various religious symbols on it.

It is known that before the arrival of the conquistadors, the Inca civilization experienced its heyday. For understanding, it must be said that in 1200-1500 AD, the Incas could skillfully work only with gold, silver and other low-melting metals.

Their metallurgical furnaces produced temperatures slightly above 1300 degrees. To melt iridium, it must be very close to 2500 degrees.

The image of the god Viracocha allows you to accurately determine the origin of the product – it was created by the Incas 12 thousand years ago. However, modern history indicates that the Inca Empire is one of the youngest civilizations.

It turns out that historians deliberately hide the truth about the ancient Incas or know very little about their true culture. Nothing reminds you?

The Anglo-Saxons destroyed the great history of the Indians, so that there was a feeling that America was built not on the death of Indian civilizations, but on the territories occupied by uneducated nomadic tribes.

Our knowledge was subjected to a similar purge. History cannot be trusted. Thank God, artifacts help to find out the forgotten truth.