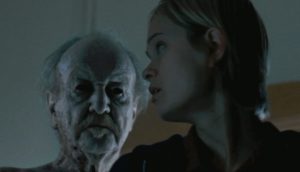 We lived in California for a number of years. While there, we purchased a lovely older home.

However, when I was alone during the day, I always had the feeling someone was watching me. A few months after, on a Monday night, my two little girls and I were alone waiting for my husband to come for dinner.

The girls ran from our bedroom where I was folding clothes, to the living room, and came back to me shouting that they had seen a ghost.

At first, I thought they had seen a real man in the back yard and that frightened me more than the idea of a ghost, but they insisted that they had seen a tall, white figure in the middle of our living room. I chalked it up to an active imagination and let it go at that although I did mention it to their father that night.

The next night, we went out to a business meeting and left the girls with a reliable babysitter. When we returned, the office light (one of our front bedrooms) was on. Sitting in front of our desk was an old man with a round face and balding!

I saw him clearly for a split second – then told my husband and our friend in the car and asked them if they had seen him too.

Although they had not, my husband thought the man was inside the house and was very concerned – of course, no one was there except my sleeping daughters and the sitter. Still very confused I mentioned to the sitter nervously what I had just seen.

She said “Oh, no! The girls had a really hard time falling asleep tonight. They kept telling me that an old man was looking at them through the window.”

I freaked out… I saw him inside and the girls had seen him outside looking in at them!

Next day, I called the parish priest and asked to have the house blessed since we were new in the house. That weekend he came and blessed everything, including the closets.

I never saw the old man again, but since then I sincerely believe in ghosts.

The Tale Of The Ghost Who Helped With Math