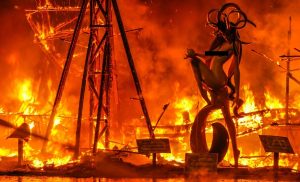 In May of 1982, Carole Compton was a twenty year old Scottish girl in love. Compton had met an Italian man in her hometown of Ayrs and moved to Italy to be closer to him. As he was doing his military service Compton took employment as a nanny to support herself. Things started off well enough but before it was over, Carole Compton would be branded a witch and her life would become a nightmare in an Italian prison.

Compton first found employment as a nanny for the Ricci family and for the first few days everything appeared to be normal. Then, with the Ricci’s very religious or perhaps superstitious maid looking on, Carole walked by a religious painting on the wall which crashed to the floor as she passed.

The Ricci’s maid insisted that Carole cross herself and began to pray. Just days later Compton accompanied the Ricci family when they went to their home in the Italian Alps. While there a fire broke out and destroyed the second floor of the home.

Two additional fires broke out over the next two days, one in a trash bin and the other in the room of the Ricci’s two-year old son. Fire investigators believed that the fires were caused by an electrical problem but a check of the home found no issues. While there was no evidence that Carole Compton was responsible for the fires, she and the Ricci family soon parted ways.

Carole Compton was not unemployed for long as she took the position as nanny for the Tonti family. The Tontis lived in their grandparents home on the island of Elba. Before long the same type of strange activity that had occurred while Carole was employed by the Riccis began to happen at the Tonti home. Religious statues were found smashed on the floor when no one had been around them. Carole began to hear scratching and crackling sounds but was unable to find the source.

The Tonti’s grandmother began to call Carole a “strega” or witch. Then a fire broke out in the bedroom of the Tonti’s three year old. Police were called and Carole was taken to jail where she would stay for the next sixteen months as she waited to be tried for attempted murder. Compton went to trial in December of 1983 and was found not guilty of the attempted murder charge. Despite the total lack of evidence, she was found guilty of arson and attempted arson and sentenced to two and a half years in prison. The sentence was immediately suspended and Compton was released.

The story of Carole Compton the “nanny they called a witch” was widely reported in both the Italian and British media as well as elsewhere.

There was no evidence to indicate that Compton was responsible for the events. As no physical cause of the various fires was ever found, the possibility remains that the case may be one of poltergeist activity. Carole Compton is now living a happy life with her husband and three children in Yorkshire. She has not been plagued by any further strange activity and tries not to think about the past.