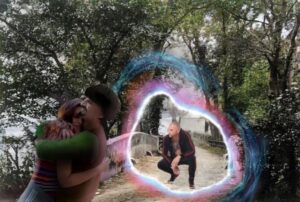 There are certain areas of Wirral that have an unusually high incidence of timeslips. In Birkenhead it’s Grange Road West, and there are many other places where people have reported time flashing back into the past, and, on rare occasions, revealing the future.

I’ve received quite a few reports over the years of strange goings-on – timewise – around Dibbinsdale Bridge, Bromborough.

There are so many sinister paranormal accounts in the area on and around the ancient sandstone bridge. I frequently hear about a demented hooded occultist with a weird suit that has spikes stitched into it so you cannot grab him, and he seems to be in cahoots with an accomplice with a green petrol can who flags down motorists and begs for petrol, giving his associate the opportunity to attack the would-be good Samaritan with a hatchet as part of some sacrificial rite.

There are also reports of a beautiful ghostly white lady on the bridge, and also a number of male figures who seem to hark back to medieval times.

In January 1994, a sewer collapsed on Poulton Road and North West Water carried out emergency repairs in the Dibbinsdale Bridge area.

One of the men who were involved in the repairs told me that he and a colleague were travelling along Poulton Road in the works van that dark January afternoon at 4:30pm, and as the vehicle approached Dibbinsdale Bridge, the men saw a rainbow-like glow surrounding the bridge’s stonework.

The van’s engine sputtered and the driver pulled over.

There were no other cars passing by at the time. As the water engineers looked on through the van windscreen, they saw the bridge glow, and then they realised that it was not glowing, but merely bathed in strong sunlight, which was impossible because everywhere else in the area was surrounded by a grey January mist, as the sun had set earlier at 4pm.

From the unaccountably sunbathed bridge came a train of men on horses, and the first one wore a crown and held his head high.

He wore a long reddish cloak and medieval attire you’d associate with the cinematic depictions of King John.

Behind this regal stranger rode two knights in full armour, with huge swords in their scabbards, and behind them were about six or seven men in colourful tunics featuring some diamond-like shape and tights.

All of the latter wore the type of hat Robin Hood is always depicted as wearing.

This line of anachronistic ‘ghosts’ looked very solid and passed the North West Water van, but not one of the peculiar strangers seemed to notice the vehicle, and as they went down Dibbinsdale Road, they slowly faded away into the January murk.

The two men in the van agreed not to tell a living soul what they had just seen and kept it secret for many years. The incident as described seems to suggest a timeslip.

The glow on Dibbinsdale Bridge has been seen before, and often causes electrical interference – in the aforementioned case, it caused the van’s engine to die.

In 2007, a 60-year-old man named Roger returned to the UK after living in Spain for many years. He went to see ex-wife, Barbara, who was living in Spital, and his 20-year-old daughter, Hattie.

Roger had last seen Hattie when she was five and suggested she should go on holiday with him to Florida, but her mother Barbara objected and told Roger: “You should have been like this years ago when you deserted us.”

Barbara allowed Roger to stay at her home for a while (in a spare bedroom) and he started trying to win over his daughter.

He discovered she had just joined a local gym and so Roger suggested going on morning runs, and he bought Hattie a pair of expensive running shoes.

Father and daughter were soon bonding as they went on a long morning run from the junction of Spital Road and Poulton Road, all the way down to Allport Road, and back again, a total distance of four miles.

In early April 2007, Roger and Hattie were running over Dibbinsdale Bridge on the return leg of the morning run – when Roger jokingly started to overtake his daughter.

He had on an MP3 player – and as he reached the end of the bridge the player made a crackling sound and the music stopped.

He slowed down, tried to get the player going again – and he looked over his shoulder to see that Hattie was missing.

Thinking she was messing about, Roger looked around and shouted: “Come on, love; don’t do this to your old dad!”

Roger then heard Hattie scream, and it had an echoing quality to it. It came from the south end of the bridge, and there was a faint crackling sound there which sounded electrical.

“Get off! Help! Dad!” yelled Hattie somewhere nearby.

At this point, Roger saw the air glow bright in front of him, and a dark opening appeared in it.

He knelt down to peer through the opening and saw a man in a green and brown outfit which looked like something one of Robin Hood’s merry men would wear – and he was restraining a screaming Hattie.

Roger crawled through the opening, ran to the figure, and punched him hard in the back.

The bizarrely-dressed man fell to his knees and Roger grabbed hold of Hattie and pulled her by the hand with so much force she fell backwards.

He dragged her through that ‘hole’ and when he looked back, the opening had vanished.

Hattie said the man had stunk of garlic when he kissed her and had spoken in what had sounded like Welsh.

She had no idea where he had come from when he grabbed her as she ran along the bridge.

The incident served to bond Hattie and her dad even more, and he later remarried his ex-wife.