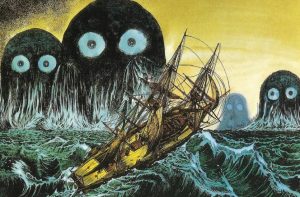 In places as far apart as Norway and China claims of cryptids that could raise storms were told with such abundance that on Chinese junks one deckhand was dedicated to the task of doing a dance with a red ribbon to ward off the dreaded sea bonze.

A bonze is a Buddhist monk, and for whatever reason, the two unrelated cultures of northern Europe and China developed coinciding folktales of mysterious monk or bishop-like monsters that doom ships.

A 13th-century medieval legend from Poland tells us of the sea-bishop. The creature was captured and brought to the King of Poland, who showed the creature to a group of Roman Catholic Bishops who apparently made contact with the creature through the use of mutual religious gestures.

The sea-bishop somehow appealed to them to be set free, prompting the Bishops to convince the King that it wasn’t a good idea to keep the thing around, so he ordered that it be released. When taken out on a boat, the creature promptly made the sign of the cross, and disappeared into the sea.

This creature is thought to have probably been a squid, with its vaguely mitre-shaped head being mistakenly thought to resemble a bishop, and its flailing tentacles appearing to make the sign of the cross. The problem is that the squid was apparently known in medieval Poland.

In 1531, off the coast of Germany, the sea-bishop reappears in the historical record. Some accounts state that it was simply sighted, but another suggests it was captured and died after three days of captivity.

This has also been explained as being a squid, though once again this is problematic as the Germans of the period also knew what a squid was. In 1546 a ‘sea monk’ was caught off the coast of Denmark.

This was different, in that at the time it wasn’t seen as a supernatural omen and was thought to be a fish that simply resembled a monk. This creature was likely a walrus or a giant squid, but its also possible that the sea monk of Denmark might have also been a type of shark.

The Japanese have the legend of the Umibozu. If a sailer encounters one of these monk-like creatures, and speak to it, the sailor is doomed. Sometimes claimed to the be the spirits of Buddhist monks that had drowned, the terrifying creature that resembles the round bald head of a monk demands a barrel which it will fill with water and drown the sailors. In return, the sailors give the creature a barrel without a bottom to trick it.

The sea-monk and sea-bishop of folklore may have been squid or may have been skates or rays. Still, medieval fishermen were aware of skates, rays and squid and weren’t likely to mistake animals they knew about for mysterious bishops that make religious signs. As to what the sea-bishop really was, given the lack of modern accounts, we probably will never know for sure.