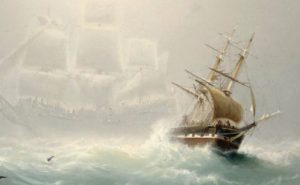 Rhode Island’s rocky shores are as good a region as any to start since they became the site of one of the earliest recorded ship disappearances on the Atlantic Coast. In May 1850, the discovery of the mysteriously abandoned fishing schooner Sea Bird became the cause of much speculation on the waterfront.

The seas had been unusually calm for days when the well-founded fisherman abruptly sailed onto the rocks near Newport. Spectators who witnessed the grounding were disturbed that the mishap occurred on a bright spring day without seeming explanation. How could any crew be so ham-handed?

The answer was simple. There was no crew. The large vessel was totally devoid of all humanity – a ghost ship by any definition. The would-be rescuer’s concern turned to distress when they boarded the grounded vessel only to discover the only life aboard Sea Bird to be a dog, a cat and a parakeet!

Though the ship was totally deserted, a boiling kettle was found on top of a blazing stove and the table was neatly set for a meal for eight. Sixty dollars in easily visible coins and cash was found in the captain’s cabin thereby ruling out any possibility of piracy, mutiny or foul play. On deck, a small skiff was still secured in place on its chocks.

Below, the odor of tobacco smoke still hung heavy in the crew’s quarters but otherwise, there was no trace of a single person nor so much as a vague clue to their fate. To a man, eight souls had simply vanished into thin air! What had happened? Why? How? Questions were many, answers few.

A review of the Sea Bird’s records indicated her captain was John Durham, lately of Middletown, Connecticut. Reportedly a family man with strong ties to the Methodist church, Capt. Durham was never heard from again.

The last entry in the captain’s log indicated a peaceful voyage; the sighting of Brenton’s Reef several miles offshore shortly after dawn. The fish hold was filled with a fresh catch of cod, sea bass and mackerel.

Later, the crew of a lobster fisherman signified they had exchanged all well signals with the Sea-Bird only a few hours before she was found derelict and abandoned on the rocks.

The mystery of the Sea Bird unexpectedly soon deepened when a Spring squall lashed the Newport area while the ghost ship’s ownership was being determined prior to a salvage attempt.

When the skies finally cleared and the seas calmed Sea Bird was gone like her crew, never to be seen again! Drifting off of the rocky pinnacle that briefly imprisoned her, the vessel sailed off on her own into apparent oblivion.

Like a ghostly apparition, she had appeared out of nowhere, swung on the rocks impaling her for a few days, and then just as mysteriously vanished from sight altogether. Sea Bird was the first of many unsolved mysteries which occurred off the North American coast.