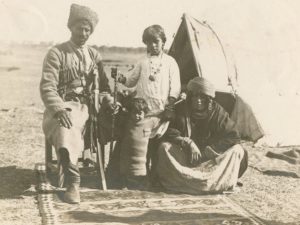 Gypsies have always been noted for their psychic ability and their uncanny knowledge of things to come, but where did these mysterious people come from?

The first known appearance of the Gypsies was their migration from the wilds of northern India in the tenth century. Splitting up into dozens of bands, they spread across Europe and into the British Isles. Eventually, Gypsies lived in almost every country in the world, including the Americas.

Where these mysterious, secretive people originated remains a mystery, although theories abound. Maybe they are descendants of the Egyptian Mother Goddess Isis.

Some believe a Gypsy helped forge the nails for Christ’s cross, and for this all Gypsies were banished, destined forever to be a people without a homeland. One theory suggests Gypsies are the descendants of survivors of a U.F.O. crash in India’s mountains.

Another explanation suggests the Gypsies are refugees tossed ashore by waves when the mighty continent of Atlantis sank to the ocean floor. Lost and afraid in what was then a wild and uncivilized land, they fled to the east finally finding refuge in the uninhabited mountains of India.

Wherever they originated, these people are unusual and fascinating. Acclaimed practitioners of the arcane arts, the gypsies have had a profound influence on folk magic throughout the world. Every phase of their lives is steeped in ritual and magic.

The name Gypsy came from the idea that the Rom came from Egypt. They refer to themselves, however, as Rom or Romany, and the language of the Rom is Romany. At one time they traveled the countryside in colorful horse-drawn caravans.

Now they’re more likely to travel in mobile homes, travel trailers or campers. Some Rom have opted to finally settle down and ply their trade from their homes or from tea rooms and small side-street shops.

The traveling Rom follow the carnivals and fairs, setting up booths and tents at every stop. Only women predict the future. The Rom call these women Chovikani, and what they do is called dukkering.

Elsewhere on the midway, while the women are busy dukkering, the men peddle jewelry, run games of chance, or show off their talents as musicians. They are open to anything that will lure a penny from the pockets of the gorgio or non-gypsy.

Rom men are also noted horsemen and skilled in horse dealing. This trade still goes on in England at places such as Appleby Fair.

Some fortune tellers are impostors, taking advantage of the reputation earned by Gypsies as seers. Most, however, are not. They may employ a crystal ball, the palm of a patron’s hand, a Tarot spread or the pattern of tea leaves in the bottom of a cup.

Using their chosen device, many of these ladies have a gift and some, apparently, can accurately predict things to come.

Not all their knowledge comes from their skill as seers. They are observant people, and can tell a lot from the appearance of their patrons, by asking leading questions, and by information the patron volunteers.

Some Gypsies are also gifted mesmerists and, by staring deep into a patron’s eyes attempt to catch him in a spell called the glamour. If a gorgio should fall under this spell, the Rom will try to convince him that he is under a curse.

The Gypsy will gladly remove this curse for a fee. This may be where the expression “evil eye” originated.

“Cross my palm with silver” is a statement often attributed to the Gypsies. A true Old World Gypsy, however, will never ask for money. It’s their belief that telling fortunes for profit clouds the psychic senses and results in a less accurate or a false reading.

Her husband or brother, however, standing at the door, is quite willing to request a small gift in payment.

Here’s a simple Rom method of prediction that you can try. You’ll need a china cup two-thirds full of cold water, a plain gold ring and a fairly long hair from someone’s head. Place the cup on the table.

Carefully tie the hair to the ring, sit down, rest your elbows on the table and, holding the tip of the hair in both hands, suspend the ring above the water, low enough so it rests within the rim of the cup.

Wait patiently until the ring begins to swing gently back and forth. Don’t intentionally move your hands to get the ring started. If you wait, it will start by itself.

As the swings become wider and wider, the ring will start to strike the sides of the cup. Count the pings. The ring will count out the exact age of the owner of the hair. Then the swings will become less pronounced and will gradually stop.

This can be truly amazing, especially if you have no idea whose hair you’re holding or how old the person is.