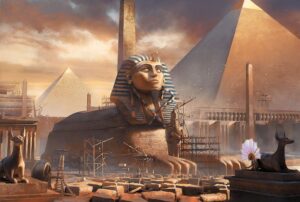 The Great Sphinx of Giza is the largest and most famous monolith statue in the world. It is also the oldest. But neither its exact age nor its builders are known.

The scientific consensus is that it was built by ancient Egyptians of the Old Kingdom during the reign of pharaoh Khafra in the 26th century BC. Many consider it a great mystery.

However, multiple pieces of evidence point to the Sphinx being much older and thus built by someone other than the Egyptians.

In 1857, Auguste Mariette, the founder of the Egyptian museum in Cairo succeded in translating the inscriptions on the Inventory Stela, a limestone monument from the 7th century BC.

It detailed how pharaoh Kufu came upon the Sphinx, which had already been buried in the sand for thousands of years at that time. According to the Stela, Kufu only excavated and restored the monument.

Boston University professor and geologist Dr. Robert Schoch analysed the Sphinx and came to the conclusion that the weathering patterns on its surface were not the result of wind, but of heavy rainfall.

The nearby pyramids do not show such signs of erosion but they were built around the same date as the Sphinx is believed to have been. This has led some to believe the Sphinx had been present in the area long before 2,500 BC since the Sahara has been arid for the past 5,000 years.

A supporting theory suggests the Nile corresponds to the Milky Way and the great pyramids to the stars that make up the constellation of Orion.

According to this theory, the massive sculpture was oriented to the Leo constellation as it appeared in 10,500 BC. Indeed, at that time, the Giza Plateau received much more rainfall than it did 4,500 years ago.

Schoch believes pharaoh Khafre merely refurbished the Sphinx to incorporate it into his funeral complex. He says the current head could not have been the original one because its erosion does not match that of the body.

So if the Egyptians did not build the Sphinx, who did and what happened to them? The mystery around it deepens.

According to mysticist Edgar Cayce, it was the Atlanteans. Underneath the structure they left a secret room called the Hall of Records. This room is said to contain the knowledge and wisdom of the long-lost civilization.

Many have searched for these rooms and recent ground-penetrating radar analysis of the area proved the existence of cavities beneath the Sphinx. They could very well be hidden rooms but archaeological digs are officially forbidden.

There are some who suggest the room has already been found and its contents are studied by a select few and kept secret from the rest of the world.

They say the truth would be damaging to the current world order and society is not yet ready to accept the fact that we are not the first technologically advanced civilization to inhabit the Earth.