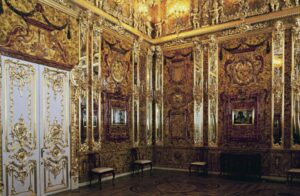 While the Nazis stormed across Europe, their storm troopers raided museums and art galleries, stealing priceless works of art to be taken back to their fatherland to celebrate the greatness of the German Third Reich.

Looting during war is nothing new of course; since time immemorial, the victors have stolen valuables from those they’ve defeated. Point of fact, a good argument can be made that theft of land and resources is the point of most wars in the first place. However, the Nazi’s looting was on a massive scale, and most notable for the priceless artworks that were stolen.

Nothing stolen in Western Europe was as precious as the Amber Room. Constructed in the 18th century in Prussia, part of Germany, for the King of Prussia Friedrich I, the room consisted of panels built of amber, backed with gold leaf, and encrusted with precious and semi-precious stones. 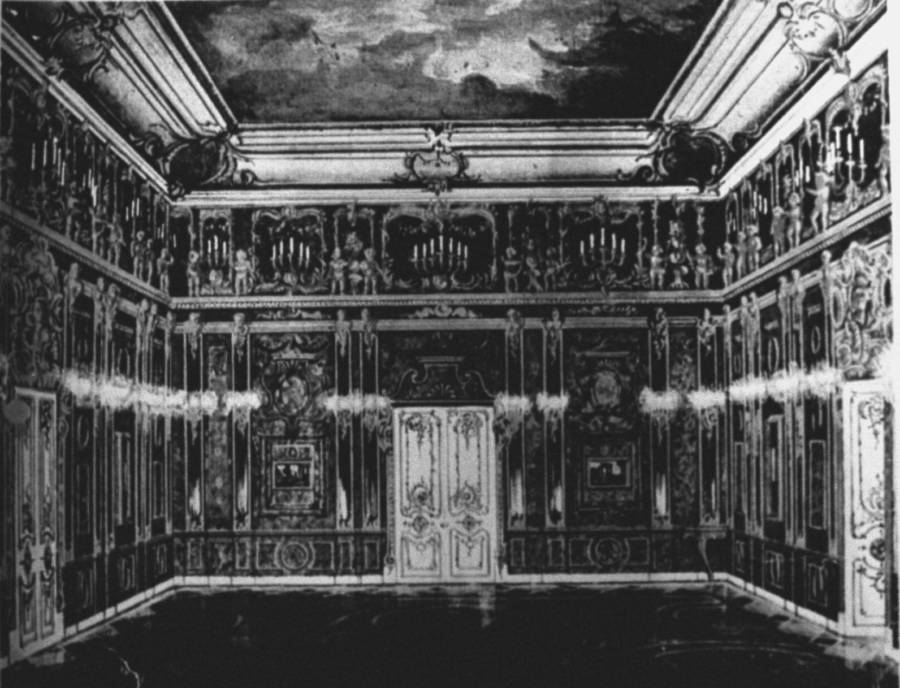 The opulent room caught the eye of Peter the Great, Czar of Russia, on a visit to Prussia in 1716. Frederick William I, then King of Prussia, gave the Czar the room as a gift, a symbol of Prussian-Russian friendship.

The panels were packed into 18 large boxes and shipped to Russia. They were initially installed in the Winter House in St. Petersburg. There they remained until 1755, when Czarina Elizabeth ordered them moved to the Catherine Palace in Tsarkoye Selo (the Czar’s Village.)

The room was renovated by an Italian designer named Bartolomeo Francesco Rastreilli, who used additional amber from Berlin to expand the room in a larger space. These final renovations expanded the Amber Room to cover 180 square feet. Altogether, the work utilized approximately six tons of amber and semi-precious stones. The beautiful room served alternatively as a meditation chamber, a banquet hall, a trophy space, and a museum.

Adolf Hitler ordered the invasion of the Soviet Union, dubbed Operation Barbarossa, to begin on June 22, 1941. It was an unprecedented military maneuver, both in scale and savagery.

Three million Germans streamed into the Soviet Union, shoving back Soviet forces and looting as they went, stealing thousands upon thousands of treasures even as they slaughtered millions and millions of Soviet citizens.

For their part, the Nazis coveted the Amber Room, believing it was made by Germans, for Germans (the work was actually a collaboration between Dutch and German artisans.)

Knowing that the Germans would steal the priceless panels, officials at the Catherine Palace on the outskirts of Leningrad (previously known as St. Petersburg) tried to hide them, but found that the amber was beginning to crumble. Instead, the officials put up wallpaper, hoping to disguise the priceless artifact as an ordinary room.

The trick failed. German soldiers tore down the Amber Room within 36 hours. It was packed into 27 crates and shipped to Konigsberg, where it was installed in the Konisberg castle museum, where it remained for the next two years.

In late 1943, the room was once again crated up and tucked away. In August 1944, the Allies bombed Konigsberg into the ground, leaving the castle as a heap of ruins. The Amber Room disappeared in the chaos of bombings and the destruction that swept over Germany in the final year of the war. Since then, the priceless work has been lost to history. 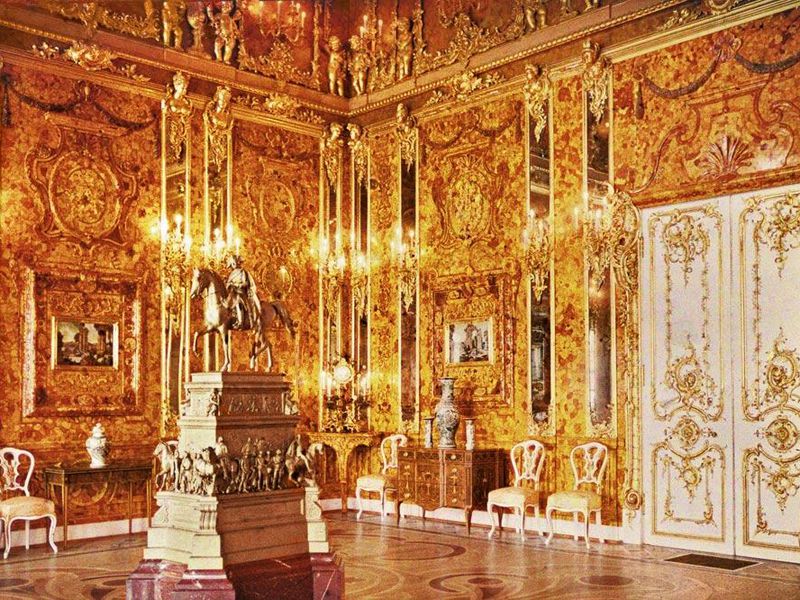 Since the chaotic final years of the war, various theories have cropped up seeking to explain what happened to the Amber Room. They range from the obvious to tin-hat level conspiracy.

The simplest, most obvious, and therefore most plausible explanation is that the Amber Room was destroyed in during the bombings that leveled Konigsberg in 1944. Given the level of destruction unleashed by the bombings, this explanation certainly makes sense. But others aren’t satisfied to let the mystery end there.

Some claim the treasure was hidden somewhere in Konigsberg (now known as Kaliningrad), remaining to be found. Others believe it was loaded on a ship, which was promptly sunk, and now resides somewhere on the bottom of the Baltic Sea.

Another theory holds that the treasure was shipped to Austria, where it was sunk to the bottom of Toplitz Lake, which is believed to hold other Nazi treasures that were hastily hidden when the war’s endgame became apparent.

The most extreme theory veers into the realm of conspiracy. It claims that Stalin had foreseen the German’s desire for the Amber Room and had a dummy version constructed, while the real Amber Room was safely carted away to the Soviet interior. 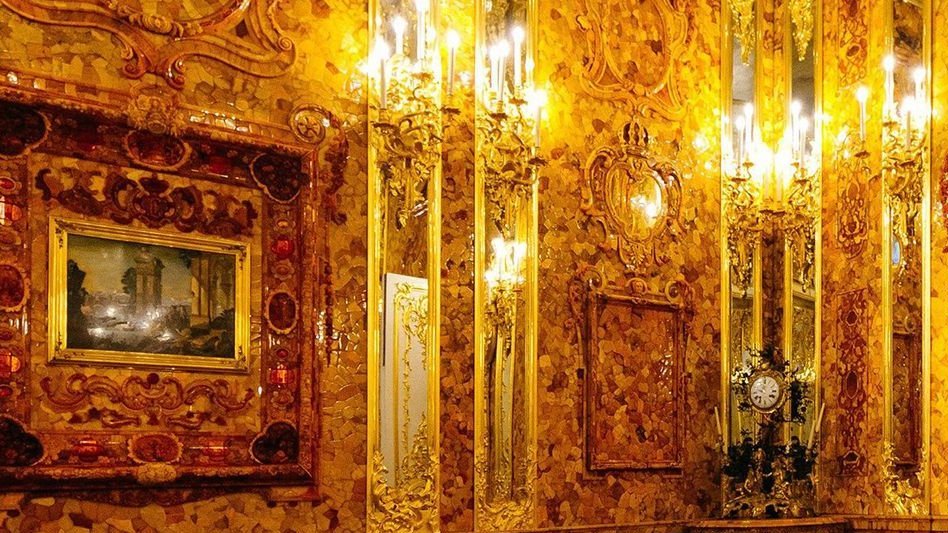 No one knows for sure. Bits of amber claiming to be from the Amber Room do appear from time to time, but they are difficult to substantiate as legitimate. Cases are still working their way through German courts regarding pieces that owners claim are part of the lost room.

It is no wonder though that the mystery of the Amber Room has so intrigued the imagination for the 60+ years since it disappeared. The work is estimated to be worth $142 million in today’s money, an amount that makes any intrepid treasure hunter tempted to take a crack at finding the lost treasure.

For its part, the Soviet Union gave up looking for the lost room in 1979, opting instead to simply rebuild it. This proved to be a tall order, as many of the skills utilized in its construction had to be rediscovered.

These included methods for carving and dyeing amber. The project took 25 years and $11 million to complete. Upon completion, the room was dedicated by President Vladimir Putin and German Chancellor Gerhard Shroder, becoming once again a symbol of peace between two nations.

The replica can be seen at the Tsarskoye Selo State Museum Reserve outside of St. Petersburg, Russia. As for the original? More likely than not, no one will ever know for sure. The mystery will remain.