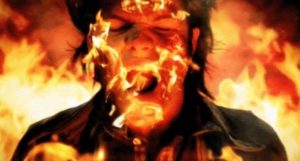 Human Spontaneous Combustion is a phenomenon where a human body bursts into flames, incinerating into ashes without an apparent identifiable external source of ignition.

It has also been described as “exploding into flames”, but this is a misnomer as there is no explosion, per se.

Believe It or Not

Over the past 300 years, there have been more than 200 reports of persons burning to ashes with no apparent cause. The first reliable historic evidence of Spontaneous Human Combustion appears to be from the year 1673, when Frenchman Jonas Dupont published a collection of Spontaneous Human Combustion cases and studies entitled “De Incendiis Corporis Humani Spontaneis”.

Dupont was inspired to write this book after encountering records of the Nicole Millet case, in which a man was acquitted of the murder of his wife when the court was convinced that she had been killed by HSC.

In the Article “Spontaneous Human Combustion” (Mysteries of the Unexplained, The Reader’s Digest Association, 1984), some 35 documented cases of spontaneous combustion were presented along with the circumstances surrounding the death. In several cases, the case of death was actually specified as human spontaneous combustion.

One well documented case was that of Mr. and Mrs. Patrick Rooney, farmers, in 1885 near Ottawa, Illinois. On Christmas morning a hired hand found Mr. Rooney sitting dead in a chair. Summoning help, they then found the remains of Mrs. Rooney under a three-by-four hole in the floor.

On the bare ground, a couple of feet below, were a burned piece of skull, two charred vertebrae, a foot, and a small pile of ashes. That was all that was left of the 200 pound woman. No other part of the floor was burned and neither was any of the furniture.

Only one corner of the tablecloth hanging over the hole was damaged. The coroner, Dr. Floyd Clemens testified in court that this was a classic instance of spontaneous combustion, i.e., “a body consumed by intense heat in the absence of any kind of fire.”

The police also said the cause of Mr. Rooney’s death was quite clear, he had been asphyxiated by the fumes of his wife’s burning body. (Mysterious Fires and Lights, Vincent H. Gaddis, David McKay Company, 1967.)

There still is no viable explanation for human spontaneous combustion. Over the years several causes were suggested, including, intestinal gases which may be flammable, certain bodily compounds that can burst into flames when exposed to air or water such as phosphorous, chemicals that may be inert when alone but combine to form explosive chemicals, fats and oils which the body makes or contains in abundance, static electricity that under certain conditions could ignite a body on fire, or a saturation effect of alcohol (for heavy drinkers or alcoholics.)

Testing and evidence however, disprove these theories for human combustion. In many cases they may cause a fire, but burn at too low a temperature for the true combustion at the level needed to incinerate to ashes while leaving the room or other furnishings undamaged.

Other causes were also suggested included lightening, microwaves, high-frequency sound, etc., but each also presented problems to support those theories.

For now, the phenomena known as Spontaneous Human Combustion which has been acknowledged by many authorities remains unexplained. It truly remains a mystery that even 21st-century science has not as yet explained.