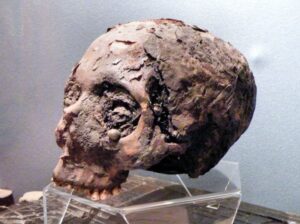 The Museum of Witchcraft at Boscastle in Cornwall has become something of a national treasure to the Pagan and alternative communities not only in the UK, but also beyond.

Since the devastating floods of 2004 which washed away much of the village, the museum has undergone an extensive refurbishment program, utilizing the very latest temperature, humidity and lighting technologies to protect and preserve the curious exhibits in its vast, and unique collection.

Among the strangest and most popular items on display is a disturbing tar-covered ‘head’ and old Bible box, which has, for many years, been the subject of much speculation as to its true origin, history and purpose.

Its unusual ‘draw’ and ’spirit’ seem to engage a huge number of the museum’s visitors and museum guides describe a certain ‘aura’ around the exhibit, which is difficult to explain, but which seems to effectively draw attention to itself. Not only that but the head has been known to move around unaided by human hands, giving rise to it being considered haunted.

During routine renovation work on winter season 1996/1997 the head was stored out of harm’s way on a bedside table in the bedroom of current museum owner Graham King.

Graham believes the relic was responsible for recurrent themes in dreams he experienced during that time: one presenting the name ‘Harry’ for the otherwise unnamed head.

Cecil Williamson, the Museum’s original founder and long-term curator, displayed a short explanation in its box for many years, which read: ‘Please do not dislike this skull.

Like you, it once could laugh and maybe cry, but those in authority decided in their self-assumed wisdom to chop his head off and dump it into a cauldron of hot tar, and the head was exposed as a public warning.’

‘At some later date a kind soul, almost certainly a priest, retrieved the much abused head and placed it in this bible-box. Hitler’s bombs blasted the London church where the box was found in the rubble of what had been the east wall directly behind the altar. Rejected by the church as an unwanted relic the head passed through numerous hands and in passing strange tales started to grow up around it.’

Graham King and his team wanted to find out once and for all, and in early 2010 an investigation into the history of the head began.

A sample of material was extracted from the exhibit by Martin Smith, lecturer in Forensic and Biological Anthropology at the University of Bournemouth, and was sent to be radiocarbon dated in New Zealand.

The relic has a 95% probability of dating between 360BC and 110BC, meaning that it is far older than Cecil Wiliamson had thought.

Far more probable is that of an ancient Egyptian mummy, likely female and the ‘tar’ in which it has been dipped is some sort of wood resin, possibly pine pitch and not bitumen as first thought. This method of preservation would be consistent with the Egyptian mummy theory.

This of course poses further questions: how did the head come to be associated with an old bible box, and where does the story of medieval execution originate?

The Case When Computer Electrocuted a Chess Master For Winning