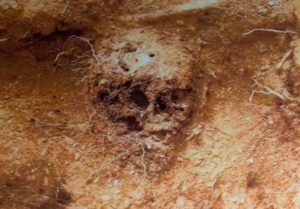 Many years ago twin brothers Frank and William “Bill” Watson were told a ghost story by their grandfather.

He said that according to a file kept by the Pennsylvania Railroad company, 57 Irish laborers who had been constructing a particularly difficult stretch of the Philadelphia and Columbia Railroad between Malvern and Frazer died suddenly in that rural valley, two months after many of them had arrived in Philadelphia on a ship from Derry.

Their bodies were buried hastily in the dirt and gravel fill that would soon support railroad tracks. One night a man walking home from a tavern reported seeing blue and green ghosts dancing in the mist at Duffy’s Cut. 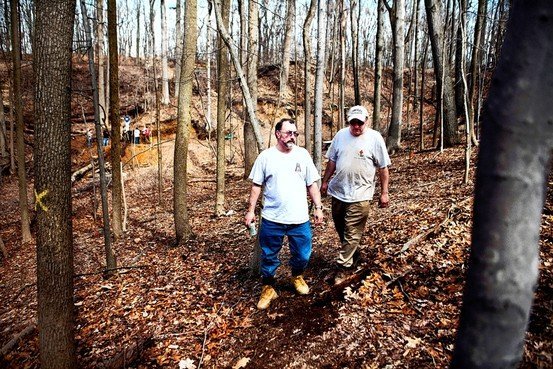 Grandfather Watson, a railroad worker, repeated the ghost story every family Thanksgiving dinner, so it became imprinted on his grandsons’ memories. They never forgot and it led to the discovery of a previously unknown mass grave and possible evidence of murder.

No one alive knows exactly what happened during that searing August of 1832 in the rough slice of southeastern Pennsylvania known as Duffy’s Cut. Duffy’s Cut is the name given to a stand of thick woodland on the outskirt of Malvern, an affluent town in Pennsylvania.

For more than 170 years, on the rare occasions that the deaths were mentioned at all, they were attributed to the outbreak of Asiatic cholera that had swept through the region, killing thousands. Now, after several years of poking around and several more of focused digging, it’s become increasingly clear that something more sinister happened as well.

Official record of the deaths at Duffy’s Cut remained locked in the vaults of the Pennsylvania Railroad (PRR) until Joseph Tripican, a secretary to a former PRR president, removed them and keep the file after the company’s bankruptcy in 1970.

Joseph Tripician ( Bill and Frank Watson’s grandfather), a talented Sicilian immigrant, had spent five decades working for the company, including a number of years as assistant to President Clement.

In the 1990s, one of Tripican’s grandsons, Reverend Dr. Frank Watson inherited the file when his grandfather died, he decided to began to research the history and investigate it along with his brother William Watson and professors Earl Schandelmeier and John Ahtes of Immaculata University in Pennsylvania. Their quest, called The Duffy’s Cut Project, is named for Philip Duffy, who hired the Irishmen to build a section of railroad known as a cut.

“It was PRR file # 004.01 C, I took one look at it and realized it was a hidden history connected to the very area where I had gotten a job” at Immaculata, says Bill. “I knew I had to find that spot.” Then something in the file caught his eye.

It was the newspaper story from June 1889 by Julian Sachse titled “The Legend About Duffy’s Cut On the Pennsylvania Railroad Between Malvern and Frazer.” Transcribed on PRR letterhead as part of the official file, the story included a lengthy interview with an elderly area resident.

On a “warm murky night” in September 1832, just weeks after the Irishmen had been buried, the man recounted, he had been returning from the Green Tree Inn and was walking along the railroad. When he came to Duffy’s Fill, he told his interviewer: “… the night was hot and foggy, so I trudged up between the stone blocks (the railroad sills, on which the tracks were laid) until I got on the fill, and there…

I saw with my own eyes, the ghosts of the Irishmen who died with the cholera, a-dancing around the big trench where they were buried; it’s true mister, it was awful. Why, they looked as if they were a kind of green and blue fire and they were a-hopping and bobbing on their graves… I had heard the Irishmen were haunting the place because they were buried without the benefit of clergy.”

Sachse gently challenged the elderly resident, but the man insisted that “what he had seen were the disembodied spirits of the laborers who were buried in the trench.” And, he added: “I hadn’t been drinking no whiskey either that night.”

“One of the pieces of correspondence in this file told us ‘X marks the spot,'” said Frank. He added that the document suggested that the men “were buried where they were making the fill, which is the original railroad bridge.”

In 2002, the brothers began digging and searching. Their research led to the finding of a mass grave where they believe 57 Irish immigrants met violent deaths after cholera epidemic struck in 1832.

For over five years, Dr Frank Watson, his brother William, and a team from Immaculata University have been searching for the men’s remains and one day, they made the breakthrough they were waiting for. Among the bones was a pipe with an Irish flag on it. However, the brothers aren’t satisfied that cholera was necessarily the cause of the immigrants death. They suspect foul play. 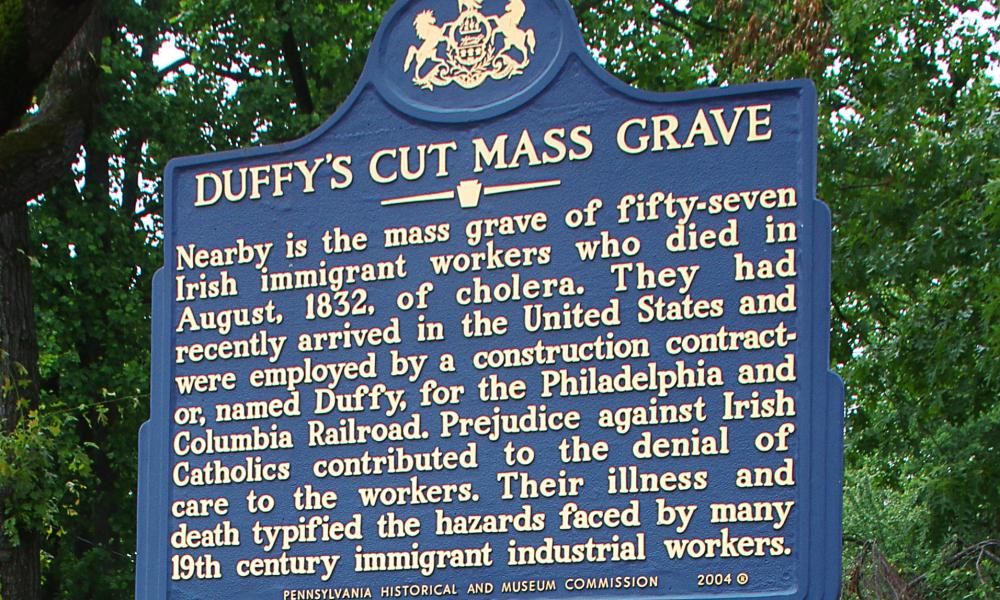 On March 20, 2009, the first human skulls were unearthed, consisting of two skulls, six teeth and eighty other bones.”We discovered the first two skulls,” said Dr Watson. And the next day they even found more human skeletons.

Janet Monge, a forensic sientists at the University of Pennsylvania who examined the remains discovered that several skulls showed signs of trauma said: “When we started to take out skeletons 6 and 7, the trauma became even more dramatic.

In the case of skeleton 6, the trauma is thin, long, and narrow—this person was clunked on the head at around the time of death. One skulls shows a perforation suspiciously like a bullet hole.” Monge said of the bodies: “If they had cholera, it didn’t kill them. I would say something else killed them, but they might have had cholera, too.”

“This is a murder mystery from over 170 years ago, and it’s finally coming to the light of day, no wonder the spirits do not lie easy in their unmarked graves,” Frank Watson said.