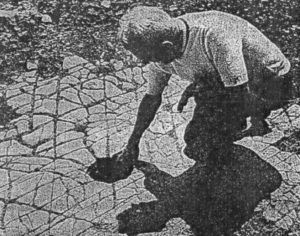 In 1969, construction workers in Oklahoma, USA stumbled upon a structure that looked man-made and, according to many authors, could rewrite the history of not only the United States, but also the world.

This structure, which looks like a stone mosaic floor, was found in a layer that experts have dated to 200 thousand years. At the same time, it is officially accepted that the first people came to North America only about 22-19 thousand years ago.

An article about this strange discovery was first published in the newspaper “The Oklahoman” shortly after its discovery, causing heated debate among experts and among ordinary readers. The article also published several black and white photos of this “mosaic”, which to this day remain the only surviving images of this object. 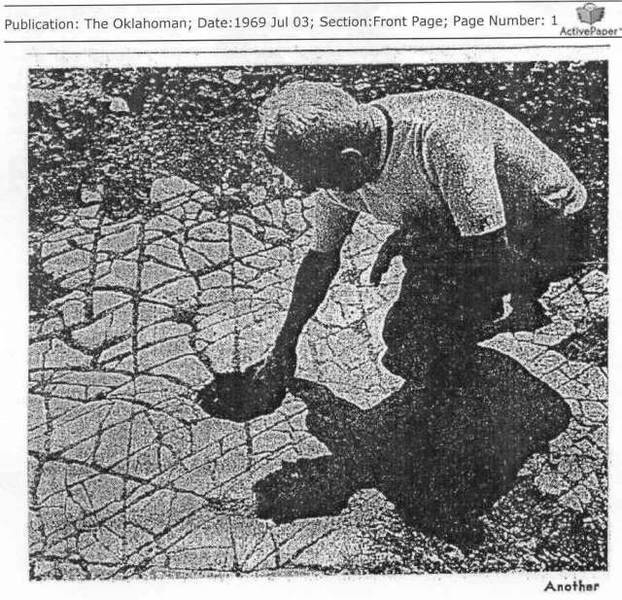 “On June 27, 1969, workers cutting through a rock located on the Broadway extension of 122nd Street, between Edmond and Oklahoma City, stumbled upon a find that caused much controversy among experts. …

“I’m sure it was human-made because the stones were arranged in perfect sets of parallel lines that intersected to form a diamond shape, all pointing east,” said Durwood Pate, an Oklahoma City geologist who studied the matter place.

“We also found the hole for the pole (pillar) which is perfectly flat. The top of the rocks is very smooth, and if you pick up one of them, you find something that indicates surface wear. Everything is too well positioned to be a natural formation.”

Dr. Robert Bell, an archaeologist at the University of Oklahoma, expressed a different opinion, saying that the find was a natural formation. Dr. Bell said he saw no trace of the processing agent. But Pate, on the other hand, found something like a grout between each stone.

Delbert Smith, geologist and president of the Oklahoma Seismograph Company, said the structure, which was discovered about 90 cm below the earth’s surface, appears to cover an area of ​​several thousand square feet.

“There’s no doubt about it. It was clearly put there, but I have no idea who could have done it,” he told the journalist.

“I am convinced that this is not a natural earthly formation, but something created by human hands,” Smith said later.

Two days later, on June 29, 1969, a new article about this find appeared in the newspaper “Tulsa World”. There Delbert Smith’s words were given more fully and the dating of the object sounded for the first time: “There’s no doubt about that. It was specially installed by someone, but I have no idea who did it. Another facet of the mystery is related to the dating. There are different opinions regarding the geology involved, but the most accurate estimates of the age of these tiles are 200 thousand years. ” 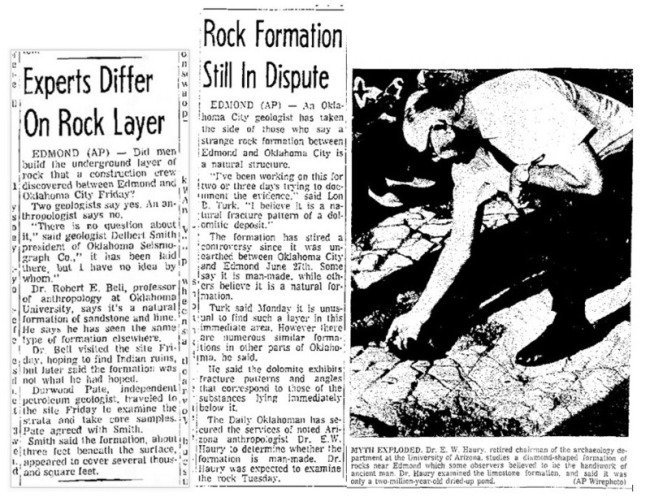 The investigation continued. On July 1, 1969, the newspaper “The Oklahoman” wrote about the discovery of a second hole in the “mosaic”. Measurements showed that the two holes are 5 meters apart. According to Peith, the rock from which the mosaic is made is Permian limestone with an admixture of quartz grains.

On July 3, The Oklahoman newspaper continued its coverage of the find, pointing out that according to reports from archaeologists, an “ancient stone hammer” was also found at the site.

“The mystery of the dolomite limestone formation discovered between Oklahoma City and Edmond was exacerbated Wednesday by the discovery of a hammer-like object at the site.

“Geologists who paid attention to the unusual formation found it difficult to explain the origin of the formation or artifact. John M. Ware, an Oklahoma City geologist, said: “It just can’t be explained in terms of geology – we need an archaeologist to give the final opinion.” However, its age and origins may remain a mystery if the archaeologist is not able to convince him to take on the project soon.

“Within 20 days, the builders will continue their work on the excavation of the area in order to begin the construction of a food warehouse. Another intriguing feature of the rock is that it contains marine sediments, indicating that it was once an ocean floor. Pate said the 100-by-60-foot formation is fast becoming a tourist attraction.

“People flock there and rip off chunks of stone. We must save it until something is done to determine its origin.”

Unfortunately, after that almost no additional information about this strange find was published in the Oklahoma newspapers and what became of it is unknown.