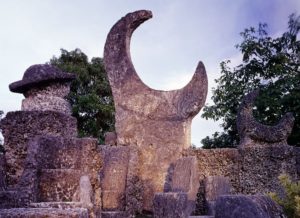 Coral Castle is a tourist attraction located in Homestead, Florida created by a U. S. Latvian immigrant named Edward Leedskalnin. The structure is composed of sculpted coral limestone with stones weighing 15 tons. The largest stone on site weighing 30 tons.

These are interesting statistics but are not the source of Coral Castle’s claim to fame. The Coral Castle’s fame stems from the legends about it’s construction claiming that it was constructed by one man using the same preternatural methods used to construct the great pyramids of Egypt.

The legend according the Attraction’s website states that when Ed was 26 years old he became engaged to marry a young sixteen year old girl he called his “sweet sixteen.” The girl backed out the day of the wedding breaking Ed’s heart. Heartsick Ed left Latvia, journeyed to the United States and set out on a quest to build a moment to his “sweet sixteen.

Ed worked on his castle for the next 28 years building the Coral Castle at its first location in Florida City, Florida. Working alone at night and being very secretive about his activities soon fueled odd rumors about the strange little man.

A group of teenagers claimed to see him causing the stones to float. Whenever questioned about his methods Ed would be evasive refusing to give specific details saying only that he had discovered the secrets used to build the Great Pyramids. This fueled further rumors especially when he would mention using a “perpetual motion holder.”

In 1936 Ed moved the first castle called Rock Gate Castle to it’s present location in Homestead, Florida. Citing concerns about protecting his privacy Ed spent three years moving the castle the short 10 mile distance to Homestead, Florida. Once the castle was in place Ed would continue working on the Coral Castle until his death in 1951.

Ed ran his own touring service of sorts, charging a dime to tour the Coral Castle. When visitors arrived at the entrance they would be greeted by a stating “Ring Bell Twice” that would summon him from his living quarters on site.

Just past the gate stating “Adm. 10c Drop Below.” During the tours Ed would always evade questions about how the Coral Castle was constructed only responding with “It’s not difficult if you know how.” When asked why he would tell visitors it was for his “Sweet Sixteen.”

Then one day in December 1951, Ed placed a sign at entrance with “Going to the Hospital” written on it. The doctors discovered that Ed suffered from an acute kidney infection and he died in the hospital only twenty eight days later.

His property was investigated after his death and $3,500 (almost $40,000 adjusted for inflation) was found amongst his personal effects. Money Ed had made conducting the tours, selling pamphlets on various subjects (including magnet currents), and the sale of a portion of his 10-acre property for the construction of U.S. Route 1.

The name Coral Castle was now given to the property and operated as a full time tourist attraction. The present owners Coral Castle, Inc purchased the property from Levin for $175,000 In 1981.

Coral Castle today is made of 1,100 tons of coral limestone, also known as oolite, in various forms including walls, carvings, furniture, and a castle tower. The structures and forms use no mortar, using only the weight of each stone to keep them in place.

This does not affect craftsmanship however, which is skillfully and precisely done. This can be seen by the fact that no light passes through the joints and the eight foot tall wall stones around the site have the same height.

Another testament to the structure’s construction happened in 1992 when the Coral Castle took a direct hit by Category 5 Hurricane Andrew and suffered no damage.

There are many structures at the castle that make it notable. Some have astronomical alignments like the one called the Polaris telescope which is an obelisk containing cross hairs precisely align with the North Star. 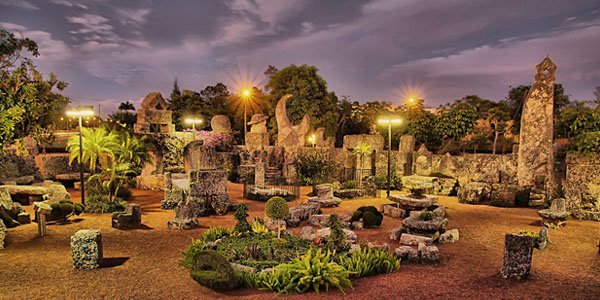 Another structure called “The Gates” is a favorite with visitors due to its ease of use despite weighing 9 tons. This is one of the many structures that puzzled experts because of how perfectly balanced the structure had to be to achieve this.

The mystery of the gate’s perfectly balanced axis and the ease with which it revolved lasted for decades until it stopped working in 1986. In order to remove it, six men and a 50-short-ton (45 t) crane were used. Once the gate was removed, the engineers discovered how Leedskalnin had centered and balanced it.

He had drilled a hole from top to bottom and inserted a metal shaft. The rock rested on an old truck bearing. It was the rusting out of this bearing that resulted in the gate’s failure to revolve.

Complete with new bearings and shaft, it was set back into place on July 23, 1986. It failed in 2005 and was again repaired; however, it does not rotate with the same ease it once did.

Coral Castle’s website states that, “If anyone ever questioned Ed about how he moved the blocks of coral, Ed would only reply that he understood the laws of weight and leverage well.” He also stated that he had “discovered the secrets of the pyramids”, referring to the Great Pyramid of Giza.

Mystery or not the Coral Castle is still an impressive accomplishment for one small man working alone. Did Ed “discovered the secrets of the pyramids?”