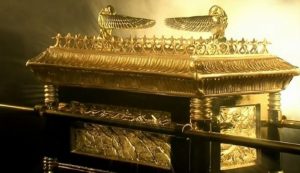 In the book of Exodus God instructs Moses to construct an ark to house his covenant with Israel. The Ark of the Covenant, as it is now called, was an acacia wood chest gilded with gold inside and out.

The chest measuring 4 feet x 2.5 feet x 2.5 had four rings through which gilded poles were place to carry the Ark. The lid of the Ark was also gilded and featured a throne with two angels on either side with wings outspread to cover the throne.

The throne, known as The Mercy Seat, is probably the most important aspect of the Ark. It was literally meant to be the throne for God’s presence on Earth and though much has been written concerning the Ark and its contents (The Stone Tablets of Law, later a bit of manna, and Aaron’s rod) it was the presence of God that made it a source of great power and central to several miracles.

Two miracles associated with the Ark of the Covenant lead some Ancient Alien theorist to speculate that the Ark was a technological device.

First when God communicated to the Israelites his voice appeared to come from between the wings of the angels on the Ark or in other words Gods radio.

Second while the Ark was being transported in a cart pulled by oxen the oxen stumbled nearly causing the Ark to fall from the cart. According to 2 Samuel 6:1–7, Uzzah saw the Ark tilt put out his hand to steady the Ark. At this moment God struck him dead. Some aspects of the Ark’s construction are similar to that of a capacitor which can story electricity. Was Uzzah electrocuted as Ancient Alien theorists suggest?

The last miracle to be mention for brevity’s sake is Joshua’s crossing of the Jordan River. According to Joshua 3:10-17 when the priest’s feet carry the Ark touched the water of the Jordan River the river was held back allowing Joshua’s men to cross on dry land, a miracle similar to the parting of the Red Sea.

According to Biblical texts the Ark traveled with the Israelites for many years, using it primarily to aid them in many battles. However, in spite of its powers, the Philistines were able to defeat them and capture the Ark. 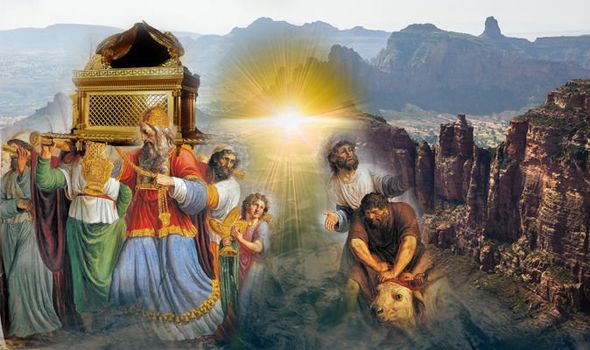 The Philistines rejoiced in their victory and took the Ark with them, but misery and misfortune befell them at each place in their country that they took the Ark. After suffering the effects, including plagues and mass cases of hemorrhoids, from possession of the Ark for seven months, the Philistines returned the Ark to the Israelites.

The Ark traveled more and changed possession over the years according to Biblical text, reaching King David in Zion as well as King Solomon. However, in 586 BC, the Babylonians destroyed Jerusalem and Solomon’s Temple and no record of what became of the Ark is in the Bible.

Many theories have surfaced as to its current whereabouts. Mount Nebo is considered a possible location. According to 2 Maccabees 2:4-8, Jeremiah is warned of the impending Babylonian invasion by God and instructed to hide the Ark in cave on Mount Nebo. God also informed and informed Jeremiah that location of the Ark would remain hidden until his people are again gathered together.

The Ark figures heavily in many Templar Knights conjectures. Author, Louis Charpentier, believed the Templar Knights found the Ark during there time in Jerusalem and took it to Chartes Cathedral. Recently Templar theorist have claimed that the Ark was taken to Rennes-le-Château, then incredibly to the United States.

The Kebra Nagast of the Ethiopian Orthodox Church gives an account of the Solomonic kings of Ethiopia. In the account of King Menelik I, son of King Solomon and the Queen of Sheba, the Ark is removed with divine assistance and brought to Axum in Ethiopia. To this day there is a small chapel at St. Mary of Zion in Axum surrounded by an iron fence that is said to house the Ark. The Ark is attended by a single caretaker who has the duty for life.

Another possible Ark location was proposed by researcher Tudor Parfitt. While researching a tribe in Zimbabwe claiming Jewish ancestry he found what he believes is an Ark account. The Lemba tribe claims their ancestors carried the ARK south to the Dumghe Mountains and hid it in a cave.

The Lemba called the ARK Ngoma Lungundu (voice of God). Like the Biblical accounts they would carry it into battle with them and followed the same rules of transport. Although most of it attributes are similar it varied in one important aspect.

The Ngoma Lungundu of the Lemba was not an Ark. It was a war drum. The Lemba claim the Ngoma Lungundu destroyed itself 700 years ago and Lemba reconstructed it incorporating material from the original. Tudor Parfitt found the location of reconstruction and now it can be seen in Museum of Human Science in Harare.

As you can see there are many stories of the Ark and its final resting place. Researchers will likely continue attempting to find its location until the day that it can be shown conclusively that it has been found.