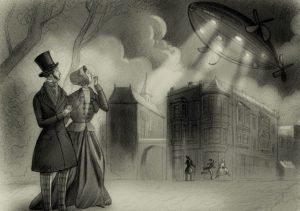 Mystery airships or phantom airships are a class of unidentified flying objects best known from a series of newspaper reports originating in the western United States and spreading east during late 1896 and early 1897.

According to researcher Jerome Clark, airship sightings were reported worldwide during the 1880s and 1890s. Mystery airship reports are seen as a cultural predecessor to modern claims of extraterrestrial-piloted flying saucer-style UFOs.

It was popularly believed that the mystery airships were the product of some inventor or genius who was not ready to make knowledge of his creation public. For example, Thomas Edison was so widely speculated to be the mind behind the alleged airships that in 1897 he “was forced to issue a strongly worded statement” denying his responsibility.

It has been frequently argued that mystery airships are unlikely to represent test flights of real human-manufactured dirigibles as no record of successful sustained or long-range airship flights are known from the period and “it would have been impossible, not to mention irrational, to keep such a thing secret.”

To the contrary, however, there were in fact several functional airships manufactured before the 1896–97 reports (e.g., Solomon Andrews made successful test flights of his “Aereon” in 1863), but their capabilities were far more limited than the mystery airships.

The best-known of the mystery airship waves began in California in 1896. Afterwards, reports and accounts of similar airships came from other areas, generally moving eastward across the country.

Some accounts during this wave of airship reports claim that occupants were visible on some airships, and encounters with the pilots were reported as well. These occupants often appeared to be human, though their behaviour, mannerisms and clothing were sometimes reported to be unusual.

“Not only were [the mystery airships] bigger, faster and more robust than anything then produced by the aviators of the world; they seemed to be able to fly enormous distances, and some were equipped with giant wings…

The 1896–1897 airship wave is probably the best investigated of all historical anomalies. The files of almost 1,500 newspapers from across the United States have been combed for reports, an astonishing feat of research.

The general conclusion of investigators was that a considerable number of the simpler sightings were misidentification of planets and stars, and a large number of the more complex the result of hoaxes and practical jokes. A small residuum remains perplexing.”

An account from Aurora, Texas, related in the Dallas Morning News on April 19, 1897, reported that a couple of days before, an airship had smashed into a windmill – later determined to be a sump pump – belonging to a Judge Proctor, then crashed.

The occupant was dead and mangled, but the story reported that the presumed pilot was clearly “not an inhabitant of this world.”[19] Strange “hieroglyphic” figures were seen on the wreckage, which resembled “a mixture of aluminum and silver … it must have weighed several tons.”

In the 20th century, unusual metallic material recovered from the presumed crash site was shown to contain a percentage of aluminum and iron admixed. The story ended by noting that the pilot was given a “Christian burial” in the town cemetery.

In 1973, MUFON investigators discovered the alleged stone marker used in this burial. Their metal detectors indicated a quantity of foreign material might remain buried there. However, they were not permitted to exhume, and when they returned several years later, the headstone – and whatever metallic material had lain beneath it – was gone.

– The mystery light reappeared over Sacramento on the evening of November 21. It was also seen over Folsom, San Francisco, Oakland, Modesto, Manteca, Sebastopol and several other cities later that same evening and was reportedly viewed by hundreds of witnesses.

– In one account from Texas, three men reported an encounter with an airship and with “five peculiarly dressed men” who asserted that they were descendants of the lost tribes of Israel, and had learned English from the 1553 North Pole expedition led by Hugh Willoughby.

– An article in the Albion Weekly News reported that two witnesses saw an airship crash just inches from where they were standing. The airship suddenly disappeared, with a man standing where the vessel had been. The airship pilot showed the men a small device that supposedly enabled him to shrink the airship small enough to store the vessel in his pocket.

In 2009, American author J. Allan Danelek wrote a book entitled The Great Airship of 1897 in which he made the case that the mystery airship was the work of an unknown individual, possibly funded by a wealthy investor from San Francisco, to build an airship prototype as a test vehicle for a later series of larger, passenger-carrying airships.

In the work, Danelek demonstrates how the craft might have been built using materials and technologies available in 1896 (including speculative line drawings and technical details). The ship, Danelek proposes, was built in secret to safeguard its design from patent infringement as well as to protect investors in case of failure.

Noting that the flights were initially seen over California and only later over the Midwest, he speculates that the inventor was making a series of short test flights, moving from west to east and following the main railway lines for logistical support, and that it was these experimental flights that formed the basis for many – though not all – of the newspaper accounts from the era.

Danelek also notes that the reports ended abruptly in mid-April 1897, suggesting that the craft may have met with disaster, effectively ending the venture and permitting the sightings to fall into the realm of mythology.