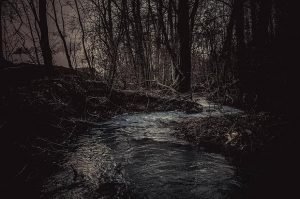 We are periodically scared of the end of the world. According to the descriptions of the “prophets”, it will look something like this: total darkness will cover the earth, and even the light of a lit match will not be visible in this darkness.

We have already learned to be skeptical of such reports. However, there are cases when anomalous darkness occurred in certain areas of the earth, covering everyone who was there.

According to scientists, this phenomenon has nothing to do with a solar eclipse.

MYSTERIOUS DARKNESS ON THE CITY SCALE

Despite the fact that there are not many documented cases of sudden mysterious darkness, scientists are seriously concerned about this phenomenon. The phenomenon was first mentioned in the Bible. It spoke of darkness as a punishment of the gods sent to the Egyptians.

The most famous, which has already become a textbook, can be considered a case in the American city of Louisville. On March 7, 1911, at about 4 pm, darkness fell on the city, which lasted for about an hour.

Although, as eyewitnesses later told, it seemed to them that they had been in thick, viscous darkness for only a few minutes. The darkness was so dense that a lit match brought to their faces could not be seen. Fear paralyzed people, they stood still, afraid to get lost.

Those who dared to find a way out of the darkness lost their orientation in space. A resident of the city, Sally Weissmith, was caught in pitch darkness at home.

She wandered around the rooms and did not find familiar objects by touch. And when the darkness dissipated, she found herself in one of the rooms, locked from the outside. So, to get there, except through the wall, she could not.

Then for a long time the people who got into this trouble were tormented by nightmares. Scientists have made attempts to somehow explain what happened by the fact that electromagnetic oscillations are to blame, which caused a state of deafness and blindness in people, but this version did not explain temporal anomalies in any way.

A little earlier, in early April 1904, a similar incident occurred at a London Underground station in the Wimbledon area. The pitch darkness, which lasted for several minutes, caused panic among all who fell into it.

Since there was no way to silence the incident, a scientific investigation was carried out. Scientists tried to recreate absolute darkness: they turned off the lighting, closed the ventilation shafts, etc. But in such darkness, people still distinguished the contours of objects and the silhouettes of those present.

That is, it was not possible to achieve absolute darkness, similar to thick black ink, it was suggested that people were blinded for a while under the influence of some unknown gas that escaped from the earth, but examinations did not show any extraneous effect on the eyes.

In September 1938, pitch darkness descended on Northern Siberia, namely on Norilsk, Dudinka and the Gulf of Ob. For about two hours everything was plunged into darkness, and when it dissipated, red-brown flashes were observed in the sky for a long time.

As meteorologists later reported, the darkness had the form of a strip up to 250 km wide. In the zone of darkness, there were no radio signals at all. And geological signal rockets showed that the sky in these places was covered with thick black clouds located extremely low above the ground. To avoid general panic, residents were told that it was smog from forest fires. However, in those days there was neither wind nor fires…

If pitch darkness falls rather rarely over large areas, then there is much more evidence of its presence in small areas.

In the summer of 1957, many French newspapers reported on the incredible story that happened to the 54-year-old Madame Genet from the city of Arles. The woman worked as a nanny in one family and was known as a calm and balanced person. That day she went to the park for a walk with her pupil.

There were few people in the park, as the summer was hot. The baby was sleeping in the stroller, and the nanny was reading the newspaper, sitting on the bench. Suddenly everything around was covered with black impenetrable darkness. Even in horror, Madame Genet was able to remember the details.

She heard the cry of a child and began to advance in the darkness towards this cry. She managed to find a stroller, she took the child in her arms and hugged her.

Then she noted that in this thick darkness neither the noise of the street nor the voices of birds could be heard. Smells were also completely absent. Madame Genet stood there, afraid to move, as it seemed to her, about 15 minutes. The darkness dissipated suddenly, as it came. The nanny found that it was getting dark outside and the lights were already on.

Putting the baby in the stroller, she went home. She was greeted by heartbroken parents. It turned out that the woman and the child were absent for three days. But the police and detachments of volunteers combed the whole city and its environs, but did not find any traces!

About the same thing happened to a group of four climbers in the foothills of the Gissar Range in Tajikistan in 1979. The day turned out to be warm and clear, by the evening the sky remained the same cloudless. And suddenly there was complete darkness, in which there was not a sound.

People joined hands so as not to lose each other, because the eyes could not hear the voices of their comrades. According to their feelings, the strange eclipse lasted about 5 minutes.

When the sun came out again, they thought it was too bright for the evening time. And the clock was noon. Having descended to the camp, the climbers learned that they had been absent for a day and a half. Rescuers several times passed in the place where they were standing, but did not see anyone …

IS IT ALL ALIENS TO BE BLAMED?

Researchers of anomalous phenomena believe that unexpected pitch darkness occurs in the event of a violation of the integrity of space. At such moments, it is possible to penetrate both into different dimensions and worlds, and out of them.

People who have experienced travel on alien ships have spoken of such periods of total darkness. In almost all cases of abduction of earthlings by aliens, pitch darkness appears. Contactees were led in this darkness to the ship, and when it dissipated. The man was already inside the UFO.

There is a story that happened in 1988 on the Kama reservoir. A certain man named Sergei was relaxing with friends in nature. He woke up at night in a tent from a feeling of fear.

Suddenly he saw strange large-headed creatures of small stature that were walking towards him. Sergei wanted to run away, but pitch darkness covered him. It seemed to him that it lasted about two minutes. And when the darkness disappeared, the man found himself among some obviously unearthly landscapes.

No one prevented him from moving and looking around on his own, only those beings who took him away followed him. Then the darkness thickened again, and Sergei found himself near his camp.

It can be assumed that in this case, pitch darkness played the role of something like a border region between worlds or universes, where time flows differently and earthly physical laws do not apply.

GUESTS FROM THE DARKNESS

Some researchers believe that the phenomenon of sudden pitch darkness is associated with the presence on earth of creatures, unknown to science, with supernatural abilities.

All these cryptids and other strange creatures enter our world through the corridors of pitch darkness. And they seem to be more familiar with this phenomenon than we are. They know when this passage will open, and they use it. Only they do not immediately disappear along with the darkness, but wait for the next opportunity to return to their world.

The same version partially explains the disappearances of people. Perhaps they were caught in the darkness and transferred to a parallel world, where they remained. Only the cautious survived: they did not dare to move, so they did not cross the line dividing the worlds.

It is no coincidence that pitch darkness is mentioned by people who survived clinical death. Maybe the dark tunnel through which they moved is the zone of darkness between the worlds.

Perhaps the study of this phenomenon will lead to the fact that people will be able to use pitch darkness in order to instantly move in space or in the world, where they are expected to meet with dead close and dear people.